His stance goes against that of the Prime Minister and fellow cabinet ministers.

Jacob Rees-Mogg has defended the right of fans to boo players who take the knee before kick-off at matches this summer, saying that they are not racist. 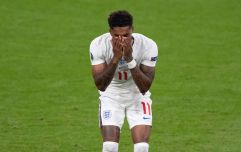 END_OF_DOCUMENT_TOKEN_TO_BE_REPLACED

Rees-Mogg said that fans who boo are in fact pushing back against a culture of "wokeness."

The leader of the Commons has become the latest cabinet minister to wade into the debate around England players taking the knee before kick-off at this summer's European Championships.

On Monday, Home Secretary Priti Patel labelled taking the knee as nothing more than "gesture politics," and said that if fans want to boo the gesture then "that's a choice for them, quite frankly."

Patel and Rees-Mogg are now on an opposite side of the debate to the Prime Minister, who has explicitly criticised (eventually) those that boo taking the knee before kick-off, telling fans to "cheer, not boo" England players.

END_OF_DOCUMENT_TOKEN_TO_BE_REPLACED

Michael Gove has also backed the gesture, telling Times Radio that he believes members of the England team should be able to "show their strength of feeling."

In the latest episode of his podcast, The Moggcast, the leader of the Commons said that taking the knee "has become problematic," and that he does not "think there is evidence" that fans who boo are racist.

But if we're being honest, if you had to put your house on two members of the government who would be against a gesture from footballers that attempts to highlight racism in society, it would be Priti and Moggy wouldn't it.

England manager Gareth Southgate and his players have made it very clear that they will continue to take the knee before each game at this summer's European Championships, explaining their reasons for doing so in no uncertain terms.