All is not well at Barcelona. Again.

After the nature of their Champions League exit at the hands of Bayern Munich last summer, Barcelona look set for another (slightly less) humiliating elimination from the competition, this time from Paris Saint-Germain.

END_OF_DOCUMENT_TOKEN_TO_BE_REPLACED

Mauricio Pochettino's men were the better side throughout Tuesday night's last-16 first leg clash at the Nou Camp. Despite falling behind to Lionel Messi's penalty in the first-half, a Kylian Mbappe hat-trick and another from Moise Kean sealed a 4-1 victory, almost certainly putting the tie to bed ahead of the second leg (when have Barca ever staged a miraculous comeback against PSG?).

It was a particularly rough night for Gerard Pique at the heart of Barca's defence. Having struggled to keep grips with Mbappe throughout the night, he was substituted with over ten minutes remaining.

The strain was clearly showing with Pique before the interval. After Mbappe's first of the night, the defender was seen (and heard) trying to rally teammates. This quickly descended into a heated exchange with Antoine Griezmann, which has been translated by Marca.

It begins with Pique urging his teammates to keep the ball for longer:

END_OF_DOCUMENT_TOKEN_TO_BE_REPLACED

Pique: "No, f**k you. We're suffering and it's been like this for five minutes."

At this point, Clement Lenglet attempts to defuse the situation, urging his teammates to calm down and keep focus. His intervention proves usuccesful. 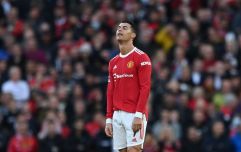 END_OF_DOCUMENT_TOKEN_TO_BE_REPLACED

The row soon dies down as Barca are forced to defend a corner. Footage of the incident, which we're not permitted to stick in here without getting a ticking off from whoever owns the broadcast licence, has been widely shared on social media.