You have to be strong, fit and fast to play elite rugby.

Nobody knows this more than England and Gloucester Rugby star Matt Kvesic.

The 24-year-old has to be one of the fittest men on the pitch to play in the seven position.

The German-born openside flanker is up against some real monsters and takes some big hits in the games.

That's where what he does in the gym become key.

We wanted to find out how the 16.5-stone athlete hones his strength and conditioning - and the nutrition that fuels him at the elite level of rugby.

Kvesic spoke to JOE about his strength training, his favourite exercises, the important of core work and how you don't have to count calories to perform at your best.

What does your strength work in the gym entail?

Weights-wise we will do between two and four sessions a week - normally Monday, Tuesday and Thursday. The focus of the session varies on what aims the individual is trying to achieve and what day of the week it is.

Thursday is more of a power session – lighter weights and less reps, but it’s about moving the weight quickly. They are speed and power-based exercises like weightlifting, sled pulls, power jumps.

Both of them are for hypertrophy. It’s a reasonably even split. We will probably do two leg exercises and two upper body exercises.


We do about four reps to build that strength.

How are your sets and reps set up? Do you do one big exericse and then assistance work?

The programme we’re on at the moment is five exercises – four are strength-based, and the last one is like rehab work. So it might be shoulders or hamstrings or your core.

The main four exercises are quite generic – some guys will do squats and others will do Olympic lifts. We do 4 sets of 4 reps.

Sometimes you can add on extra mobility-based stuff to aid the exercise,  but we tend to just focus on the one exercise to get the maximum benefit out of that.

Pre-season it’s very much week-on-week lifting more and more, because you’re not playing and your body’s fresh and you’re trying to get in peak physical condition.

During the season it’s quite hard to be breaking records every week after playing 80 minutes at the weekend.

But it’s that fine line of doing enough to ensure you’re ticking over, but not doing too much to affect the way you play at the weekend.


What lifts do you do to build explosive power and are you looking for specific movements that will translate onto the pitch? 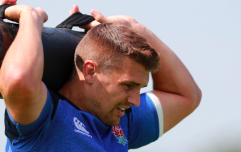 END_OF_DOCUMENT_TOKEN_TO_BE_REPLACED

I do a lot of Olympic lifting. That’s where the power comes into it. So the power clean, the hang clean, snatches – it’s a good total body movement that requires power.

Because it’s total body, it works every muscle. So your core is being worked as well as your legs and arms. It’s the co-ordination factor as well.

We will do that alongside jumps – like a standing box jump – to get the power in your legs. No load, just bodyweight. With a distance of about 1m up onto a box so that’s where you get your power through the legs.

We do a lot of plyometrics. Marlon Devonish, the ex-GB sprinter, he’s in there. So on our Thursday session, when we do our power-based stuff, he puts a plyometric session in there which is a lot of high hurdles and low hurdles, for distance and for height, stuff on mats and some core and rotational work, which is all linked to that power-based stuff.

If your core is strong then it allows your hips and your legs to run freely and create more power and more efficiency in your running.

What's the importance of core strength training in rugby? Is it a real benefit to you guys and what kind of stuff do you do?

There’s a myth that we do all this amazing, fancy stuff. But we just do the basics – core, planks, side bridges, variations on sit-ups, side-to-side stuff to try and get the obliques, and roll-out work.

It’s a mixture of working the muscles concentrically and eccentrically – and also isometrically, which is the plank-based stuff.

It’s not fun, but the benefits are massive. For me, being strong over the ball as a seven is hugely important, so that really helps.

Rotationally, when people try to twist me and try to clear me out, it’s being strong enough to resist that with a counter-movement. Or for people that are running, it makes that more efficient and makes you more free through your hips.


Have you always trained this way since you started in the game? Or have things changed and developed? Rugby versus NFL: two top players take on a series of fitness challenges

END_OF_DOCUMENT_TOKEN_TO_BE_REPLACED

I have always been lucky. I got picked up by Worcester when I was 14 or 15. I was put in the EPDG and was moved up into the ‘A Scheme’ when I was 16, which was like a young academy.

So I did proper weights sessions from that age. I was never lifting heavy weights, but it was teaching you the movements so when you come to maturing and being able to lift weights heavy at 18,19 and 20 then it wasn’t just a shock to the system that I was loading up parts of my body that I hadn’t done before.

That was a massive benefit for me – especially 16 to 18 where I wasn’t lifting heavy, but doing a lot of technique stuff based on Olympic lifting and the core base. It gave me a really good platform to move on and develop my strength when my body had matured.

Injury prevention is massive at that age to give your body the best chance when you make it into professional men’s environment, where there’s big lads running at you, you can cope with the impact.

What are the most important exercises for you in strengthening key areas or preventing certain injuries?

To prevent certain injuries we do a lot of shoulder rehab stuff – so that’s a lot of banded stuff, like rotations, press-up based work with the bands and inward and outward rotations. Thirty seconds on a high resistance band, I honestly find that stuff harder that weights. It’s more of a work on.

It’s like that with glute bands as well, so strengthening the glutes. Just doing spider walks or flicking your legs out at like 3 o’clock, 6 o’clock and 9 o’clock for 10 reps with a heavy band is hard work.

The core based work as well – the planks. Injury prevention work I find is key.

Then strength exercises – if you want to get strong legs, then squatting is key. I quite enjoy doing it, it works your legs, your core and your back. Basic exercises, done well are probably the way to go.

Diet and nutrition plays a massive part in getting you performing at a high levels. What’s your diet like day-to-day?


It’s reasonably structured. I’m lucky that I’m not one of the heavier set blokes. Most of our diets are done on body fat and luckily my body fat is quite low.

I’m quite relaxed with what I eat because I’m reasonably strict anyway. Day to day in training we get a breakfast cooked at the club by a chef. That’s an egg option – an omelette or scrambled eggs.

Or a meat which could be salmon, bacon or sometimes chicken, which I’m not a massive fan of having.

I think breakfast is more like healthy sausages and bits of fruit in the morning.

I have a little bit of carbs, but not too much. I have my carbs at lunch along with two pieces of meat. Like chicken or salmon, with all the vegetables and salad to go with it.

Then for my evening meal I tend to just go quite basic. Salad and veg with a meat option, like steak or maybe salmon or chicken again.

After training we will get a soup or a bolognaise. I have the odd snack in between, but not much. I do like a bit of chocolate, but other than than I’m pretty strict until after the game when I’ll have a pizza or have chocolate afterwards.

So you don’t have to count calories?

Personally I don’t count calories. With rugby you can’t be too lean because you need a bit of fat on you as protection. But you can’t be too fat otherwise you’ll just be a mess around the park.

It’s finding that balance. You just eat well. I’m not a massive man for taking protein. I take it when I need it. If I feel like I’ve done a weights session when the boys are getting protein shakes in them, I’d rather wait 20 minutes and have my food.

For me it’s knowing your body and what it needs.

I’ve worked with nutritionists for many years so you pick up different stuff. So I’m on a down week this week and I will try and not eat as much and also eat less protein so you get a little peak when you come back into training.

What things have you found works for you?

You load the beetroot over the week – one on Wednesday, Thursday and two on Friday and one on Saturday. I find it really helps me.

What energy sources do you find works best for your body?

I  will eat what I like. I’m not a massive pasta fan, I’d rather have rice. I’m not big on chips. I really like sweet potato. I’d have them over white potatoes. I don’t eat too much bread. I have the odd bit of brown bread in the morning with my salmon and eggs.

Rice or sweet potato is where I’d get my carbs, or vegetables which also have carbs in them.

What do you do for recovery?

After a game and recovery after training, I eat well.

Then we do a lot of hydrotherapy, jogging in the pool, stretching in the water to help the muscles and get the blood moving.

Spin bikes or I will take my dog for a walk – it’s just anything to get the blood moving really. If I sit down after a game for one or two days I feel awful for it. If I play on a Saturday, I don’t feel bad on a Sunday. It’s the Monday when I feel bad. The DOMS (Delayed Onset Muscle Soreness). We do our own recovery on Sunday - biking, swimming or walking.

Then Monday physio if you’re injured or a massage to get the blood moving and loosens you off.

We’re back training that day. It will be a lighter session. But we could do a conditioning session to get the heart and lungs going again.

What kind of cardio conditioning are you doing?

Being a seven one of your jobs is being one of the fittest players on the park. Obviously a bulk of all our fitness and strength is done pre-season.

But in season it’s harder to get the load in. Monday I always do running and fitness extras, but use it as a recovery tool to get the body moving after the game.

I’m working more aerobic stuff not anaerobic stuff. I do a block of four minutes running. So basically 10 seconds on, 10 seconds off – but you’re constantly moving. You could do 50m for 10 seconds then your recovery is 20m in 10 seconds.

It’s very game-specific. Then we do speed-based stuff which is shorter, quicker, and in less time.

You may also like
Sport
Get your tickets to House of Rugby LIVE
Sport
England coach Eddie Jones on how he made Japan a force in world rugby
Sport
Warren Gatland already has two players in mind for Lions captain
Fitness & Health
Everything England rugby player Jack Nowell eats on his 5,000 calorie-a-day diet
Sport
Rugby's red bib and why no player in his right mind wants to wear it
Next Page