This would be typically unsubtle of the iconic DC villain

For years, fans of the comic book villain Joker have looked for clues about the true identity of Batman's arch nemesis, and the protagonist of the upcoming feature-length film has given us an intriguing new take on that.

Previously given the name Jack Napier in the 1989 Batman movie, Joker's identity in comic books has remained hidden.

In the new release, coming out later this year on 4 October, Joker reveals his name to be Arthur Fleck. With the shortened version A. Fleck, fans have been quick to consider this a sly dig at former Batman actor Ben Affleck.

The actor left DC's Justice League franchise earlier this year and admitted that he simply "couldn't crack it" having been targeted by critics of the film series, which failed to be a box office success amid mixed reviews.

Would a film producer really toy with an iconic character's back story and history to make a cheap joke about a former actor from another film? Okay, maybe there is something in this... 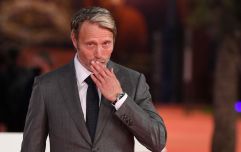 END_OF_DOCUMENT_TOKEN_TO_BE_REPLACED

The first trailer shows Phoenix engaging in Joker's characteristic creepiness and certainly not fitting in with regular society. Check it out below.

popular
Actor who plays Neil in The Inbetweeners 'embarrassed' to be a Millwall fan
Infantino says Wenger's proposal change offside rule would 'stop marginal offsides'
Millwall manager responds to fans booing players who took the knee
Millwall fans boo their own players as they take the knee before kick-off
Paul Merson says Mesut Özil 'has to play' against Tottenham
Former Bayern Munich wonderkid signs for second-division Welsh club
A definitive ranking of every swear word from worst to best
You may also like
Entertainment
New romcom savagely mocked for 'terrible' Irish accents
Entertainment
Zlatan Ibrahimović biopic movie to be released in 2021
Entertainment
Johnny Depp to receive eight-figure salary for Fantastic Beasts despite being dropped
Entertainment
QUIZ: How well do you know the lyrics to these Disney songs?
Fitness & Health
Jamie Foxx describes how he is bulking up to play Mike Tyson
Next Page