Amber Heard reportedly handed over a binder full of years worth of notes taken by her therapist ahead of a major TV interview as she continues to insist Johnny Depp did physically and sexually abuse her. 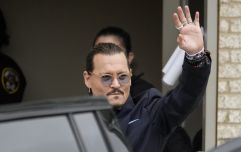 END_OF_DOCUMENT_TOKEN_TO_BE_REPLACED

The actress is said to have given the notes to NBC's Dateline which will air an interview on US television tonight. The notes, which were dismissed by a judge in Depp's defamation trial against her last month as "hearsay", are said to detail instances where The Pirates of the Caribbean star is alleged to have "hit her, threw her against a wall and threatened to kill her".

MailOnline reports that Heard, 36, is claiming the notes, dating back to 2011 from the very beginning of her relationship", proves her ex-husband was abusive and is fresh evidence.

Friday on a special edition of #Dateline at 8/7c on @NBC, Savannah Guthrie’s exclusive interview with Amber Heard. pic.twitter.com/TW9pZWlnGa

END_OF_DOCUMENT_TOKEN_TO_BE_REPLACED

The interview follows a three-part sneak peek that was broadcast on NBC's Today show earlier this week, when Heard repeated her defamatory claims about the abuse she says she suffered at the hands of 59-year-old Depp.

In released clips Heard has also told how she still loves Depp, still plans to fulfil her pledge to donate $7m to charity from her divorce settlement, how she faced a "courtroom full of Jack Sparrow's", and how Depp "lied" about hitting her.

In a preview of the Dateline episode, notes from Heard's therapy sessions are shown on-screen, as Savannah Guthrie explains that they contain several descriptions of violence that the actress detailed during her appointments.

"There's a binder worth of years of notes dating back to 2011 from the very beginning of my relationship that were taken by my doctor who I was reporting the abuse to," Heard told Guthrie.

END_OF_DOCUMENT_TOKEN_TO_BE_REPLACED

"Her notes represented years, years of real-time explanations of what was going on."

According to Dateline, the notes contain descriptions of violence dating back to January 2012, when Heard told her therapist Depp "hit her, threw her on the floor"'.

Eight months after that he "ripped her nightgown, threw her on the bed" and then in 2013 "he threw her against a wall and threatened to kill her", the notes allege.

Earlier this month, a jury in Fairfax County, Virginia, ruled that Heard defamed Depp by publishing a piece about being a sexual assault survivor in the Washington Post and awarded him $10 million in compensatory damages and $5 million in punitive damages. The punitive damages amount was later reduced to $350,000 in keeping with Virginia law.

Heard, the juror found, was also defamed. She was awarded $2m.

Her lawyer, Elaine Bredehoft, previously told the Today show that Heard could not afford to pay Depp, saying, "Oh, no, absolutely not", and that her client plans to appeal the verdict.

Despite the outcome of the trial, Heard is continuing to publicly accuse Depp of abuse. She told Dateline that she was not trying to "seek vengeance" against him and is not "vindictive".

"As silly as it is to say this out loud, my goal - the only thing I can hope for at this point... I just want people to see me as a human being."