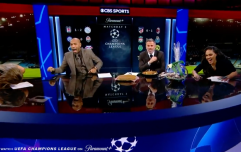 Jamie Carragher's attempt at an American accent will give you nightmares

END_OF_DOCUMENT_TOKEN_TO_BE_REPLACED

You know the ones. They probably remind you of hot summer days as a kid. You may recognise them as ice pops, or associate them with a certain Mr Freeze.

Or maybe you don't. In which case join the debate, because it turns out that, much to the shock of many, these things have a variety of different names that they go by.

What do you call these? I’ll start: Freezies. pic.twitter.com/zRo6KlFvhG

The original poster suggested that they were called 'freezies,' which I don't think is an outrageous suggestion seeing as Mr Freeze is the kingpin of the ice pop world. But some of the other names that people give them are just plain wrong.

A remarkable amount of people seem to recognise them as 'otter pops,' which it seems is a popular brand in the US, and people in Australia for some reason seem to only refer to them as 'zooper doopers.' It's quite frankly upsetting really.

Those who are uneducated on their ice-based treats tried to label them as ice lollies, but as any sane person knows, an ice lolly needs more body to it and, most importantly, a stick before it can be given that illustrious title (see: Twisters, Fruit Pastille lollies).

END_OF_DOCUMENT_TOKEN_TO_BE_REPLACED

A few suggested 'popsicles,' which can't really be argued with much, and then there appear to be a variety of answers from people who clearly lack imagination. One person called them 'ice sticks' (boring), another said they were 'icy poles' (meh), whilst a third just said they were 'flavoured ice' (accurate tbf).

You may not be surprised to hear though, that no conclusion was reached on the matter. A real shame really.

Try not to let the debate keep you up at night.

popular
Over 200 kilos of cocaine with Liverpool FC branding seized
The JOE Friday Pub Quiz: Week 271
Pro Volleyballer spends £590K believing he was dating supermodel Alessandra Ambrosio for 15 years
Ava White, 12, dies after Liverpool stabbing - four boys aged 13 to 15 arrested on suspicion of murder
Tobey Maguire Spider-Man spotted in No Way Home merchandise
A definitive ranking of every swear word from worst to best
Woman left devastated when nobody turned up to her Friendsgiving
You may also like
Life
‘Little blast of summer’ to bring highs of 28°C
News
Tokyo Olympics: Italy's Lamont Marcell Jacobs wins shock gold in 100m final
Fitness & Health
Americans are mocking the British 'heatwave' after realising how hot it really is
Life
Having sex could alleviate hay fever, according to experts
News
Aldi's £40 BBQ pizza oven is back just in time for summer
Next Page