Piquet earlier apologised to Hamilton for using a racial slur 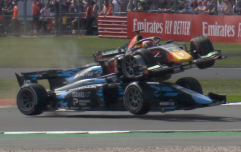 END_OF_DOCUMENT_TOKEN_TO_BE_REPLACED

An interview with Piquet on a Brazilian podcast from last year surfaced this week, in which he twice used a racially offensive expression when referring to Hamilton.

On Friday, Sky News said further footage had emerged of the three-time former world champion making more offensive comments about the Mercedes driver. Piquet is said to have made the offensive remark when  describing how Hamilton missed out on the 2016 championship to Nico Rosberg.

The broadcaster reported that Piquet said of Hamilton: "The [racist term] must have been [homophobic slur] at the time. He was pretty bad."

The development comes just days after Piquet apologised "wholeheartedly" apologised to Hamilton for using a racial slur. He was said to have used language that's equivalent to or similar to the N-word while discussing a collision between Hamilton and Max Verstappen. 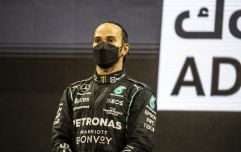 END_OF_DOCUMENT_TOKEN_TO_BE_REPLACED

Piquet said he "strongly condemned" any suggestion his remarks were intentionally racist.

Hamilton, 37, later posted a statement on Twitter on Tuesday, insisting that "these archaic minds need to change."

He said: "It’s more than language. These archaic mindsets need to change and have no place in our sport. I’ve been surrounded by these attitudes and targeted my whole life. There has been plenty of time to learn. Time has come for action."

It’s more than language. These archaic mindsets need to change and have no place in our sport. I’ve been surrounded by these attitudes and targeted my whole life. There has been plenty of time to learn. Time has come for action. 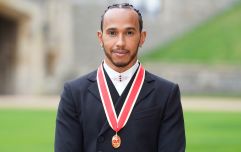 END_OF_DOCUMENT_TOKEN_TO_BE_REPLACED

His remarks were supported by F1, who said in a statement: "Discriminatory or racist language is unacceptable in any form and has no part in society.

"Lewis is an incredible ambassador for our sport and deserves respect."

It continued: "His tireless efforts to increase diversity and inclusion are a lesson to many and something we are committed to at F1."

popular
Multiple fatalities after planes collide mid-air over airport
Andrew Tate banned from Instagram and Facebook
Incredible case of the only known individual whose parents were two different species
Footage emerges of Andrew Tate getting knocked out during kickboxing bout
The JOE Friday Pub Quiz: Week 308
Court hears cringeworthy poems Ryan Giggs wrote to his ex
Former Playboy Bunnies detail what it was like having unprotected orgies with Hugh Hefner
You may also like
Entertainment
Lewis Hamilton reveals blockbuster movie he was almost in - and he would have been perfect for it
Sport
Lewis Hamilton could be left with brain damage due to porpoising Mercedes, according to Toto Wolff
Sport
Why Lewis Hamilton won't be racing in FP1 at French Grand Prix
Sport
Max Verstappen calls for alcohol consumption regulations after abuse allegations at Austrian GP
Sport
Red Bull fans cheer as Lewis Hamilton crashes during Austrian GP qualifying
Next Page