Labour MP quits party because it's 'racist', immediately refers to 'people who are a funny tinge' during BBC interview

How long did that take for them to shit the bed? A few hours?

This morning Angela Smith announced herself as one of the co-founders of the new Independent Group, a political group formed by seven rebel MPs who quit Labour.

At the announcement press conference, the MPs stood up, one after the other, and passionately highlighted the key factors in their decision to leave the party, including Jeremy Corbyn's approach to Brexit, racism in the form of anti-Semitism within the party and the growing influence of the "hard-left".

In fairness to Smith, managed to last - what was it? A couple of hours? Three max? - before appearing on the BBC as a representative of her new political movement and completely fucking it.

How you ask? By actually answering a question by saying the following sentence, during an interview on the subject of whether racism remains a problem in Britain: "It's not about being black or a funny tinge-" before interrupting herself to add, "from the BAME community".

On that evidence, Angela, I'd perhaps maybe argue that racism is a big problem in the UK, yeah. Considering you were an elected member of parliament and you are referring to BAME people as being a 'funny tinge'. I'd say it's a reasonably bad state of affairs to be quite honest with you. 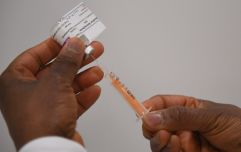 Doctors call for gap between Pfizer vaccine doses to be reduced

END_OF_DOCUMENT_TOKEN_TO_BE_REPLACED

Smith has served as representative for Penistone and Stocksbridge since 2010. In her resignation speech of the Labour whip, she cited her 'Labour family' and 'working-class pride' before going on to explain the reasoning behind her decision.

She stated that "the Labour is a party now characterised by intolerance" and "fosters division rather than unity" before concluding that she could not "in all conscience, continue to affiliate with a Labour Party that I consider unfit for government".

As starts go, it's a rather inauspicious one for the Independent Group.

popular
Dustin Poirier annihilates Conor McGregor to earn stunning UFC 257 victory
The JOE Friday Pub Quiz: Week 227
Can you identify these cheeses just from a picture?
UFC fighter axed from Conor McGregor card after bizarre security breach
QUIZ: Name all 50 of these Football Italia era players
Eminem stuns Dana White by telling him his opinion "doesn't matter"
QUIZ: Match The Simpsons quote to the character who said it
You may also like
News
Police break up wedding party with 400 guests at school
News
The Only Way Is Essex star Mick Norcross dies, aged 57
Life
Make your own Bernie Sanders meme in any location with this website
News
Bernie Sanders memes spread like wildfire after Joe Biden inauguration
News
People think The Simpsons predicted Kamala Harris becoming VP
Next Page