Having pretty much ignored Northern Ireland for the entire election, the political media are now beginning to ask a few questions about the DUP.

However the largest party in Northern Ireland, led by Arlene Foster, are something of an unknown quantity to the average man or woman on the street, and the average political columnist.

Theirs is a long and interesting policy history, but just to mention a few of the highlights.

Which brings us to Sky News Friday afternoon and a question from Kay Burley that will go down as one of the greatest of a rather eventful General Election.

As the Conservatives grab hold of the closest dance partner that could keep them in power, without scrutinising their credentials, Burley challenged Tory MP Graham Brady on the DUP's policies.

Boy, did she challenge him...

"Given that the Lib Dems are where they are, what first attracted you to the anti-abortion, pro-Brexit, climate change deniers that are the DUP?" 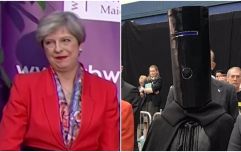 Theresa May clearly isn't a fan of Lord Buckethead

END_OF_DOCUMENT_TOKEN_TO_BE_REPLACED

Rather than challenge Burley's description of the Unionist party, Brady denied a coalition was being sought.

Burley was having none of it and pressed the chairman of the powerful 1922 Committee on the DUP's suitability for government.

Watch it below, it is a fantastic grilling.

Fair play @KayBurley. That is one hell of a question... Strong follow-up as well #GE2017 pic.twitter.com/GWMF1KLvKf