Ohio bans abortion at 6 weeks... the young girl was 6 weeks and 3 days pregnant

Controversy over the US Supreme Court's ruling to overturn Roe v. Wade resurfaced this week after it emerged that a 10-year-old child rape victim had been denied an abortion in Ohio. 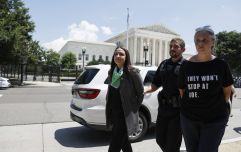 END_OF_DOCUMENT_TOKEN_TO_BE_REPLACED

Hours after the high court decision, the US state outlawed any abortion after six weeks into the pregnancy, a point at which many don’t yet know they’re pregnant.

The young girl approached a child abuse doctor she was 6 weeks and 3 days pregnant and was therefore denied an abortion.

The story has led to an outpouring of anger on social media, with one person saying America is "now the land where a 10-year-old victim of rape has fewer rights than the rapist".

America is now the land where a 10 year old victim of rape has less rights than the rapist. 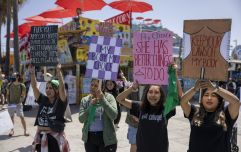 END_OF_DOCUMENT_TOKEN_TO_BE_REPLACED

The 10-year-old was forced to travel to neighbouring Indiana to access an abortion, one of many now forced to cross state lines to receive abortion services.

And even this may soon cease to be an option for pregnant people in nearby states like Kentucky and Ohio with restrictive abortion laws.

In late July, the Indiana legislature will hold a special session where it will consider further abortion rules.

END_OF_DOCUMENT_TOKEN_TO_BE_REPLACED

“It’s hard to imagine that in just a few short weeks we will have no ability to provide that care,” Dr Caitlin Bernard, an Indianapolis-based obstetrician-gynecologist who treated the 10-year-old, told the Indianapolis Star.

California governor Gavin Newsom also hit out at Republicans after the news broke.

popular
Landlord faces £40k fine after tenant puts swimming pool on roof of flats
Graeme Souness under fire for calling football a ‘man’s game' while sat with Karen Carney
Incredible case of the only known individual whose parents were two different species
Comedian cancelled after ‘getting his penis out on stage’ during Edinburgh Fringe Festival
Man with laughing condition like The Joker accused Joaquin Phoenix of stealing his persona
JK Rowling told 'you are next' after stabbing of acclaimed author Salman Rushdie
Man 19 years older than his wife shocked to learn he had met her when she was a baby
You may also like
Life
Men are using period apps to help women after Supreme Court abortion decision
Life
Satanic Temple to challenge Supreme Court abortion decision as it violates religious freedom
News
Demand for vasectomies triples since Supreme Court abortion decision
Entertainment
Bette Midler wants the US to ban Viagra because it’s ‘God’s will’ to have a ‘limp d**k’
News
Days after abortion decision, Supreme Court protects man's right to pray on a football field
Next Page