She says weed is much better for her than drinking

Canadian mother of two Caitlin Fladager has revealed that her kids don't mind her smoking weed because it also means they get their fill of McDonald's when mummy gets the munchies.

In Vancouver, Canada, where both recreational and medical use of marijuana is legal, two genius kids have worked out they get junk food when their mother goes for the lettuce - the devil's lettuce, that is.

In a video posted to Instagram, the 27-year-old mother explained her motivations for smoking at home. 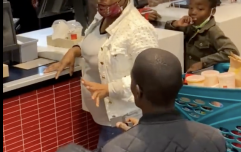 END_OF_DOCUMENT_TOKEN_TO_BE_REPLACED

"When you've been waiting for your mom to [leaves and wind blowing emojis] so she would want to order McDonald's too," reads the caption.

Alongside the video plays Cassie's 'Me and U' with Caitlin's son lip syncing the lyrics, "I was waitin' for you / to tell me you were ready."

Before you hop into the comments to complain about how irresponsible it is, Fladager has previously addressed this issue.

Other people have since leapt to her defence to address the enormous stigma behind weed use.

END_OF_DOCUMENT_TOKEN_TO_BE_REPLACED

One person wrote: "Yassssss amen. Tired of this huge stigma even though... wine isn't frowned upon like weed is?! F that."

Another said: "Yes especially when the same people judging are the ones getting wine drunk most nights lol."

In a lengthy Instagram post, Fladager says that weed has been the only thing to help her through hard times.

She wrote: "[weed] is a plant. It is a medicine. I don't take any medication, except for [weed].

"A few years ago when I was going through a really hard time in my life, I turn to drinking. I drank too much, and for all the wrong reasons. I was going down a dark hole that could've quickly become very dangerous.

"But do you think anyone ever blamed my drinking for the mental health problems I was having back then? No, they told me I needed a drink to lift my spirits up and make me feel better."