He's in ridiculous shape for a 56-year-old

Former WWE superstar The Boogeyman has posted footage of himself training in the gym - while still wearing his full wrestling gear.

The Boogeyman hasn't wrestled for the WWE since 2015, when he was a surprise entrant in that year's Royal Rumble. Before then, he had only made sporadic appearances since being released by the company in 2009.

But that hasn't stopped the 'Bottomless Pit' resident from donning his old wrestling gear for a bit of chest day action in the gym.

Not what you'd normally see on the cable crossover, but at least it's not as bad as wearing an altitude mask on the treadmill.

Real name Marty Wright, The Boogeyman also seems to be offering his personal training services - but there's a twist. He'll be dressed up in full wrestling gear for that too.


It's fair to say Wright is still in ridiculously impressive shape for a 56-year-old. His Instagram account is a shrine to both the gym, his spell in the WWE, and time spent competing on the independent circuit. 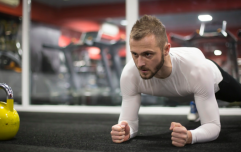 Planks are one of the worst ab exercises, says Triple H's personal trainer

END_OF_DOCUMENT_TOKEN_TO_BE_REPLACED

He routinely posts clips of himself training others too.

Wright's route into pro wrestling was unconventional, to say the least. He originally appeared as a contestant on Tough Enough, the WWE's talent-scouting reality TV show where budding superstars compete for a WWE contract.

He was cut from the show, however, when it emerged that he'd lied about his age when he applying. By 10 years.

The Boogeyman first appeared on WWE screens when he was caught hiding in various places such as closets, cars and cupboards. When it came to making his in-ring debut, he was known for eating worms, smashing an alarm clock over his head and absolutely battering pretty much everyone that stood in his way.

This included former WWE Champion John 'Bradshaw' Layfield, who he defeated easily at the 2006 Royal Rumble.

You may also like
Entertainment
QUIZ: How many of these classic WWE wrestlers can you name?
Film
Beyond The Mat remains the greatest wrestling documentary of all time
Entertainment
The Rock hints that he might play in new American football league he bought
Football
The Undertaker sends a message to Leicester City over their new signing
Football
Noted West Ham fan Triple H urges Declan Rice to stay at the club
Next Page