Cristiano Ronaldo's ridiculously muscular legs are from another planet

We all know by now that Cristiano Ronaldo is an absolute athlete.

The Real Madrid and Portugal star is still running rings around everyone even at the grand old footballing age of 31.

Ronaldo, who has just helped his country through to the semis of Euro 2016 over Poland, is more known for his ridiculous abs. They are ridiculous to be fair - they're sharp enough to grate cheese on.

But while everyone has been marvelling at that super lean Michelangelo-esque mid section, the former United winger has been working on his legs. 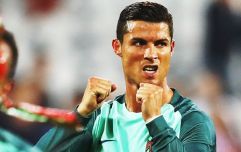 END_OF_DOCUMENT_TOKEN_TO_BE_REPLACED

Rather than chilling out between his country's last 16 win over Hungary and their quarter final match against the Poles, Ronaldo was smashing the gym.

He posted a classic 'no pain, no gain' gym shot to prove it but we couldn't help notice how ridiculously shredded his legs are... 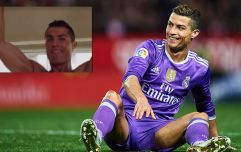 END_OF_DOCUMENT_TOKEN_TO_BE_REPLACED

Those quad muscles are bulging right out of his legs. That surely can't just be from just running around a football pitch, the Madrid star must be doing some serious squats.

His calves and hamstrings are equally insane when he was doing some resistance band work at the start of the European championships.

Beast mode well and truly ON...