He has gained over 10kg of muscle during lockdown

Speaking to JOE ahead of the Olympic Games in Tokyo, swimmer Adam Peaty said experimenting with a vegan diet cost him muscle mass and strength.

With gyms across the country forced to close due to the coronavirus pandemic, many have found it difficult to make meaningful progress towards their fitness goals.

Interestingly, however, Peaty said he has actually managed to put muscle size on during lockdown. 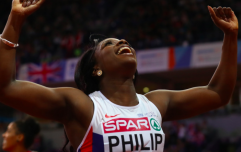 END_OF_DOCUMENT_TOKEN_TO_BE_REPLACED

"Obviously there was no equipment available at first so it was hard to adjust.

"I had a gym in my garage but it was bare. I managed to get some equipment down from Nottingham.

His lockdown training plan was basic but effective. 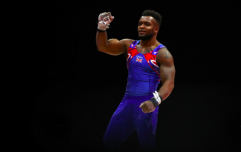 Why are gymnasts so jacked? Their training says it all

END_OF_DOCUMENT_TOKEN_TO_BE_REPLACED

"Lifts I'd be doing were ones I just had room for, so squats, bench press (but no spotter so I had to go light), pull-ups... Anything that Rocky did, I did!"

Peaty also made use of some unconventional exercises, such as press-ups on parallettes while wearing a weighted vest.

"I went high rep on these and they were also great for my core," he said.

When Peaty does have access to a full gym, his workout plan revolves around the following primary lifts:

The most decorated Olympian of all time, Phelps was renowned for putting away almost 12,000 calories a day during his run of eight golds in eight races at Beijing 2008.

Such a feast doesn't feature in Peaty's plan, however.

"I think sport has evolved in the almost 14 years since then," he said.

"Sport science has come on a lot since then too, it's more about fuelling for performance now rather than putting away X amount of calories. It's also important that we focus on cleaner foods so we're not carrying excess body fat."

Peaty said he is unlikely to go beyond 6,000 calories a day on his current diet plan.

Peaty thinks this is a more realistic and attainable method of managing your nutrition.

The 26-year-old experimented with a vegan diet back in 2018, but said it cost him muscle mass.

"It's hard to understand how much protein you need. For me, I need meat to get enough protein.

"It's a hard diet to adjust to. It's just too hard with the amount of muscle I have to sustain."

Peaty said he would likely adopt a more plant-based diet were he not an Olympic-level athlete.

"It could just come down to education, or not knowing what I was consuming [when I was a vegan].

"I'm a big guy so I do need a lot of protein. Sometimes I will swap meat for a vegetarian option - I think it's important to branch out and explore different options."

popular
Phillip Schofield struggles to stay composed as guest reveals alien lover after getting sick of 'Earthmen'
Mike Dean reveals why he 'sniffed' assistant referees' shirt before kick-off
Johnny Depp's lawyer Camille Vasquez responds to romance rumours
Johnny Depp's attorney Camille Vasquez revealed to be dating Brit
'Wow, hats off to her! Sick remark from Bobbi Anne McLeod's killer after she survived 12 hammer blows
Wagatha Christie: Rebekah Vardy storms out of court just 30 minutes into final day
We FaceApp morphed every 21/22 Premier League team so you don't have to
You may also like
Sport
Team GB finally takes the gold at Winter Olympics
Sport
15-year-old Kamila Valieva lands historic quadruple jump at Winter Olympics
Sport
The story of Eddie the Eagle: From plastering to the piste
Sport
How to watch the big events at the Winter Olympics
Sport
Piers Morgan is predictably fuming at Simone Biles being crowned athlete of the year
Next Page