If you were Heard, would you be going to a normal airport?

Amber Heard has been slammed online after she was spotted getting on a private jet - despite her lawyer claiming she had insufficient money to pay her former spouse Johnny Depp.

After the defamation trial in Fairfax, Virginia ruled largely in Depp's favour, awarding him damages of $10.35m - an amount that was later lowered to $8.35m - Amber Heard's lawyer Elaine Bredehoft later claimed the actress was broke.

However despite Bredehoft's comments, the 36-year-old was allegedly pictured getting on a private plane.

END_OF_DOCUMENT_TOKEN_TO_BE_REPLACED

According to TMZ, the Aquaman star went to New York City for meetings and then flew back to DC. Heard has been staying in Virginia since the trial, which is around a three hour drive to DC.

Her sister Whitney, who you may remember from the trail itself, was also on the plane alongside two other unidentified people.

The pictures drew a lot of attention from the legions of social media users who aren't exactly Heard's fans, with some questioning how she managed to pay for such an extravagant mode of transport.

"Amber Heard claims poverty. Elaine Bredehoft claims poverty, that her client cannot afford to appeal, or pay the judgement, after a unanimous jury found her to have defamed Johnny Depp, yet she can take a private plane across the country," wrote one Twitter user. 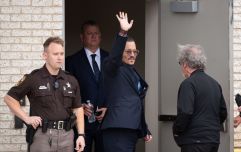 END_OF_DOCUMENT_TOKEN_TO_BE_REPLACED

In all fairness, if you were Heard, would you be going to a normal airport? The actress has received an immeasurable amount of abuse online, whether it's through social media posts or scathing opinion pieces.

There's also no indication that Heard bought the plane or even contributed to its purchase.

An upcoming interview with NBC's Savannah Guthrie suggests that Heard travelled to NYC to record the landmark moment. While this has not been confirmed, it could be argued that NBC paid for her travel.

At the time of writing, it is unclear who paid for the transport.

.@savannahguthrie sat down for an exclusive conversation with #AmberHeard. "You cannot tell me that you think that this has been fair,” Heard shared, in reference to social media representation. pic.twitter.com/56Ju7pYg1x

A snippet of the video interview was shared today, with the full piece set to go live on Friday.

In the 22-second clip, Heard can be seen questioning the amount of abuse she has received online.

"Even somebody who is sure I am deserving of all this hate and vitriol, even if you think that I'm lying, you still couldn't look me in the eye and tell me that on social media there has been a fair representation," she said. "You cannot tell me that you think this has been fair."