The gaming world is abuzz following a slate of Final Fantasy announcements from developers Square Enix.

The Japanese company has a bevvy of treats in store for Final Fantasy fans - the big news being Playstation 4 and Xbox One gamers will finally get their hands on Final Fantasy XV on September 30.

There's even an additional demo incoming to the online stores to whet your appetites. Dubbed "The Platinum Demo", it's a free side story which follows young Prince Noctis (that's Final Fantasy's main character to you and me) in a dream world using toy weapons and controlling monsters.

Also incoming is "Brotherhood: Final Fantasy 15" - a five part Youtube animated series that fleshes out the background of the main characters to the game. The first episode is available to watch here.


On top of that, Final Fantasy XV is getting a full CGI prequel film starring Aaron Paul, Sean Bean and Lena Heady (that is one heck of a cast). Called "Kingsglaive: Final Fantasy 15", it will further flesh out what's already proving to be a rather dense story line. 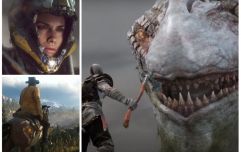 END_OF_DOCUMENT_TOKEN_TO_BE_REPLACED

Nevertheless, Final Fantasy XV is coming to Playstation 4 and Xbox One on September 30 and is looking to be big. You can get primed with one final trailer (featuring Florence + the Machine covering Ben E. King strangely enough) below.


popular
QUIZ: Fill in the missing club from these players' career paths - part 4
EA fined millions by Dutch court over FIFA Ultimate Team loot boxes
Borat fans raise $100,000 for woman tricked in new film
PlayStation and Xbox users will now be able to play against each other online
Krasnodar players criticised after only four take knee for Black Lives Matter
QUIZ: Can you guess the drink from its can?
QUIZ: Match the Step Brothers quote to the character that said it