Contrary to some opinions on the internet, elite fighters are not flawless combat machines who owe us perfection, and UFC 235 proved that

Elite fighters have off nights, they make mistakes and they don't deserve to be dragged over the coals for failing to perform to the best of their abilities on every single occasion.

END_OF_DOCUMENT_TOKEN_TO_BE_REPLACED

Did you ever have a day at work when you just didn't feel yourself and your output suffered? Imagine having the world watching and ready to criticise you for that rare off day.

That's what Tyron Woodley is facing after showing up to his latest title defence with an inability to get out of second gear.

Woodley looked uncharacteristically flat throughout his defeat to Kamaru Usman in the co-main event of UFC 235 and the best motivational efforts of cornermen Din Thomas and Duke Roufus couldn't get 'The Chosen One' to fire.

"Tonight it was just weird," Woodley said of his performance. "I was just flat and I don’t know why but when you’re on this stage, you can’t have a bad night."

END_OF_DOCUMENT_TOKEN_TO_BE_REPLACED

Woodley is one of the greatest welterweights of all time and his talent should not be questioned for his first defeat in five years.

But it will be because it's 2019 and nowadays, the chance to ridicule those with more bravery and skill is too tantalising to turn down for the majority of social media users.

END_OF_DOCUMENT_TOKEN_TO_BE_REPLACED

And unlike a misfiring centre-forward, who will be given the opportunity to find the net again the very next weekend, elite fighters only compete two or three times a year and factors outside of their control - such as injuries and victories for other contenders in the meantime - may mean that former champions like Woodley could have to wait a year to get another shot at the title.

It's the near-superhuman feats of top-level fighters like Woodley that makes it all the more jarring to see performances like his on Saturday night but we should simply acknowledge the fact that they are human beings who cannot just turn in a world class showing with the click of their fingers.

One off night shouldn't damage a fighter's legacy but unfortunately, fight fans are a fickle bunch and it's that judgemental and changeable nature that has also led to the criticism of Herb Dean.

Dean remains one of the top referees in mixed martial arts but was the subject of much ridicule for an error in judgement with his decision to wave off Ben Askren vs. Robbie Lawler just moments before Woodley took to the Octagon.

"That was a bad stoppage."

"What a disappointing way to end this fight."

Ben Askren picks up a controversial first win in the UFC.#UFC235 pic.twitter.com/y3Q85nxddL

With Lawler trapped in a bulldog choke, the sight of his arm dropping to the mat led Dean to take a closer look at the submission.

The veteran official checked Lawler's arm again and while we have the benefit of hindsight to let us know that the former 170lbs champion in fact gave a thumbs-up to convey that he was OK to continue, Dean had to make an immediate decision on a fighter who he believed was unconscious.

There is no conspiracy theory. It was simply a fuck-up. And we should all be allowed a few fuck-ups.

Nevada State Athletic Commission executive director Bob Bennett addressed the subject in the post-fight press conference, where he explained how he briefs the referees and makes them aware that they ought to jump in a second too early rather than a second too late.

If Lawler was unconscious, as he appeared to be initially, then every second would have mattered and Dean would have been in for even more criticism had he allowed an unconscious fighter to continue to be choked.

It's tough to think of a more thankless task than the job of a mixed martial arts referee but luckily for Dean, he was given the opportunity to prove his worth in the main event, when he made the decision to deduct Jon Jones two points for an intentional foul.

Woodley will have to wait for his chance to redeem himself but rather than take the time to ridicule either him or Dean, we should appreciate the fact that they are humans too and that they are both simply victims of their own success because we expect flawless results from them every time but, unfortunately, humans aren't perfect.

And on the subject of humanity, both Robbie Lawler and Anthony Smith deserve all the credit in the world for the integrity they showed on the main card Saturday night. 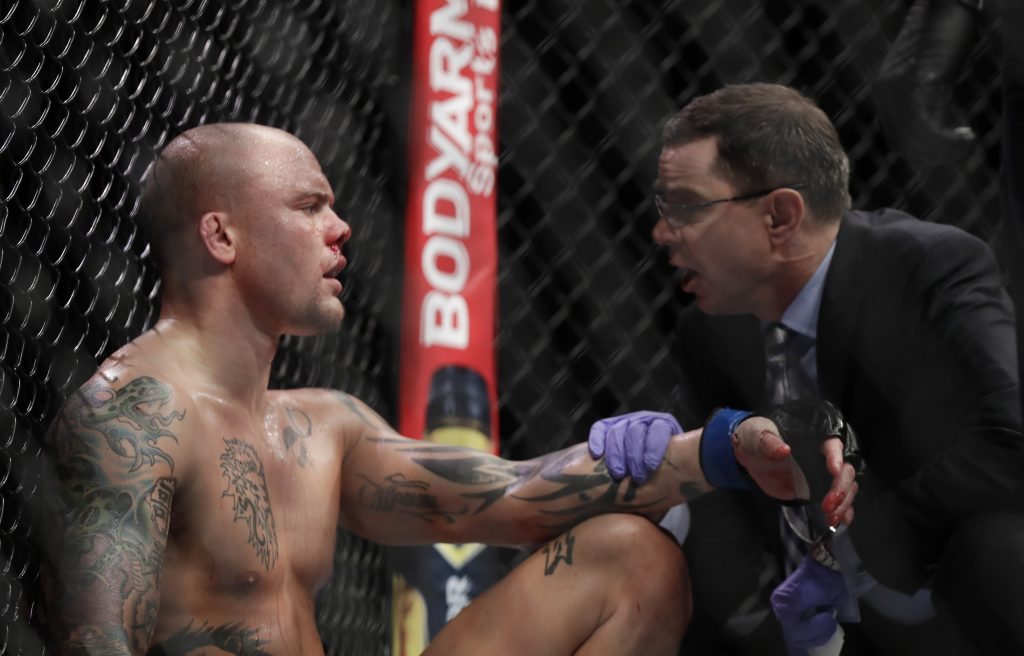 More hot-headed fighters than Lawler would have been excused for causing a scene in the wake of Dean's decision to award Askren the submission win but 'Ruthless' gave a terrific account of himself as he spoke calmly with the referee, shook Askren's hand and even applauded the official result.

Smith, meanwhile, could have claimed an official win over Jon Jones if he had stayed down following an illegal knee in the penultimate round of the UFC 235 main event.

But 'Lionheart' explained how he would not have considered a disqualification victory a real win and would have preferred to lose all five rounds against the better man on the night than win on a technicality.

Lawler and Smith will both rebound from their defeats. Tyron Woodley will be competing for world titles again. And Herb Dean will go from one end of the year to the next without a mistake but should not expect the level of praise for his many great calls to match the vitriolic criticism he faced in the wee hours of Sunday morning.