Somebody buy that man a drin- never mind, he's sorted. How about a medal instead?

A man has defied the odds - and seemingly all laws of physics - by managing to carry 64 pints for him and his bros. Legend. 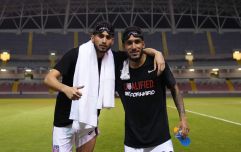 END_OF_DOCUMENT_TOKEN_TO_BE_REPLACED

The unknown hero is still yet to be identified but what we do know is that he is a king among men.

Even more impressively, he has beaten the record of fellow FC Twente fan, Christiaan Roetgering, who just a couple of weeks ago hauled 48 beers up the same steps of the Dutch club's De Grolsch Veste stadium in the Netherlands.

Here's a side-by-side of the two equally incredible feats: 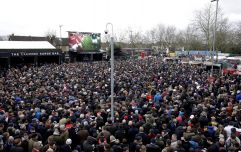 END_OF_DOCUMENT_TOKEN_TO_BE_REPLACED

This latest picture was captured over the weekend as Twente lost 5-2 away to PSV Eindhoven - not a surprising result by any means but one that the beer would've certainly made go down easier.

While each row of beer is only separated by the classic flimsy paper cup holders, the mystery man has been clever in making sure to deploy extra layers of card at the bottom for a sturdier base. Dutch engineering.

Nevertheless, it's still some achievement to successfully carry all that booze - not to mention the weight of responsibility on your shoulders. Succeed and you're a hero, spill so much as a drop and you're a villain and/or the fool.

Be good to see another angle actually.

People in the comments have, of course, absolutely lapped it up: "Me at Wetherspoons after finding out a pint costs 99p:", "Messi carrying Barcelona be like:" and so on.

If we ever manage to track this man down, we'll make sure to shake his hand - that's if it's free at the time. The guy clearly has more important matters to attend to.