Guy seen carrying 48 beers in one go at football match

FC Twente supporter Christiaan Roetgering became a football icon this weekend after he was seen carrying 48 beers - by hand - into a football match.

The 23-year-old was going to watch his club host rivals Willem II on Sunday (October 17) and presumably thought he might be quite parched throughout the game.

"I always go to the game with a group of friends, and each time one of us has the job of getting the beers in," he explained.

"This time it was my turn, and I didn't fancy having to keep going back and forth to the bar.

"So I decided to get everything in one visit," he continues, laying out his risky but certainly impressive method.

Speaking as if anyone could do it, the footie fan says he merely carried them through corridors and up the stairs.

"But it's not a record - my friend Jochen has managed in the past to carry 50 beers in one go.

Dutch football fan Christiaan Roetgering was seen walking through a stadium with 48 beers. He had five trays of beer stacked on top of each other: “I always go to the game with friends, and each time one of us has to get the beers in. This time it was my turn.”

Speaking on his rise to internet sensation, he said: "I must have had 300 friend requests on Instagram. I was watching the highlights on TV on Sunday, and my phone just exploded." 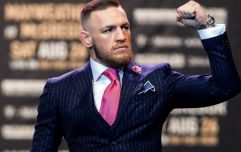 The #McGregorChallenge has taken the internet by storm

END_OF_DOCUMENT_TOKEN_TO_BE_REPLACED

Those beers might have been sunk sooner than expected as FC Twente were not victorious against Eredivisie rivals Willem II.

The two sides concluded the match with 1-1, with FC Twente having one player sent off during the game.

Nonetheless, people are in awe of the footie heroe's effort.

One person wrote: "I always think it sucks if I have to take 3 [beers] with me."

Another added: "We will take this guy to Merol next time."

A third said: "Never complain that you have to get too much."