The fight was due to go ahead in September

Hafthor Bjornsson's fight with Eddie Hall has been postponed after the Englishman suffered a torn bicep in training.

END_OF_DOCUMENT_TOKEN_TO_BE_REPLACED

The news was announced by MTK Global Boxing late Sunday night on Twitter.

"Eddie Hall has suffered an injury, and his planned fight with Hafthor Bjornsson has been postponed," wrote MTK.

The rest of the September 18th card will still go ahead as planned, however.

In gruesome footage accompanying the announcement, Hall can be seen tearing his bicep during a routine sparring session. 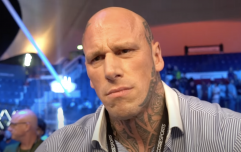 END_OF_DOCUMENT_TOKEN_TO_BE_REPLACED

The injury occurred when Hall attempted to throw a fairly innocuous-looking left hook at his sparring partner.

The Stoke man yelled out in agony right away. He knew exactly what damage had been done.

END_OF_DOCUMENT_TOKEN_TO_BE_REPLACED

The bad blood between the two strongman behemoths goes back to 2017, when Bjornsson accused Hall of cheating as he became the first Brit to lift the World's Strongest Man title for more than 20 years.

Both men have lost a considerable amount of weight for the fight, although it has now of course been postponed.

Hall has lost five and a half stone since being crowned World's Strongest Man in 2017.

When Hall was competing in strongman, he was wolfing down as much as 12,000 calories every single day:

In order to lose so much weight, Hall completely overhauled his diet. His daily diet now includes: