She is facing charges of attempted theft regarding Nancy Pelosi's laptop

A woman has been arrested in connection with the recent US Capitol riots following a tip-off from her ex-boyfriend.

22-year-old Riley June Williams is currently being held in custody after her eagle-eyed ex-partner spotted her in a news report from inside the US capitol taken on the day of the riots.

The man subsequently called the FBI hotline, which led to Williams' arrest. She is under investigation for stealing House Speaker Nancy Pelosi's laptop - and then allegedly attempting to sell it.

According to the BBC, over 100 arrests have been made following the US Capitol riots on January 6, 2021.

In the wake of the US Capitol riots, President Donald Trump was impeached for a record second time.

Many have blamed Trump for instigating the riots, including Arnold Schwarzenegger and ex-FBI director James Comey. The incumbent president began the day with a rally outside the US Capitol, where he continued to peddle the myth that November's presidential election was fraudulent and "stolen" from him. 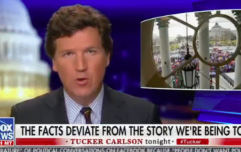 END_OF_DOCUMENT_TOKEN_TO_BE_REPLACED

When asked if the far-right was a bigger threat than radical Islam, ex-FBI man Comey said he thought so - adding it is nothing new for America.

He said his predecessor even went on record to state that the far-right is the single biggest threat in America.

Comey then added: "The threat has slowly risen as Donald Trump and those around him have withdrawn the control rods.

"America has always had a radioactive stew of racist conspiracy-minded misogynist people oriented towards violence. We've always had that in this country."

Later that day, pro-Trump mobs stormed the historic building while Congress was in session, verifying Electoral College votes. Police were attacked as those responsible went about their rampage. The carnage that ensued led to five deaths, with at least one police officer among the fatalities.