Theresa May is travelling to Strasbourg on Monday night for talks with EU Commission president Jean-Claude Juncker, just hours before putting her Brexit withdrawal agreement before a parliamentary vote.

Since MPs overwhelmingly rejected her original deal to leave the European Union on January 15, the prime minister has been urgently trying to negotiate new terms - with little success. Still, in heading to this late meeting, reports suggest there is no guarantee of a breakthrough.

However May is said to hold out hope that changes to the backstop can be agreed, with an arbitration system and a time limit floated as components that would satisfy enough Brexiteer MPs to get the deal through parliament.


Whatever she comes away from Strasbourg with, set to be announced in a statement late on Monday evening, it is anticipated the government will go ahead with Tuesday's meaningful vote on the withdrawal agreement, whatever state it is in at that point. 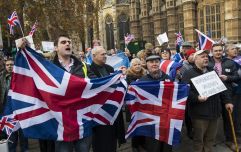 END_OF_DOCUMENT_TOKEN_TO_BE_REPLACED

If it is rejected, May has promised parliamentary votes on leaving without a deal and delaying the Article 50 process to leave the EU by a few months.

May travelled to meet Juncker after dodging an urgent question put forward by Jeremy Corbyn on Monday afternoon. Both the Labour and Conservative leaders were due to take part in a Commonwealth Day service at Westminster Abbey.

Only May attended, where she read a passage from the Bible while junior Brexit minister Robin Walker fielded questions in the House of Commons.

You may also like
News
EU launches legal action against the United Kingdom over Brexit bill
News
Brexit: Lorries will need permit to enter Kent from January
News
Ed Miliband offered out Boris Johnson in front of his mates - and the PM did nothing
News
All living former prime ministers have condemned Boris Johnson's latest Brexit move
News
Conservative MP says deal leaving EU is 'like a country becoming independent from an empire'
Next Page