On Tuesday April 20th, a teacher that has yet to be identified resigned from her position at Lamar Elementary School in Greenville, Texas, following an image of her placing her foot on a Black student's neck was released. 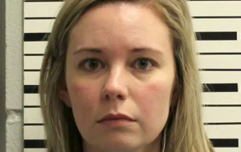 END_OF_DOCUMENT_TOKEN_TO_BE_REPLACED

According to reports, the scenario in which the "staged photo" arose came after the teacher was alleged to have told the boy that she would place her foot on his neck if he didn’t complete his school work.

The student's aunt, Lakadren Moore, said that her nephew and his other classmates believed the teacher would not follow through with the warning and after he got on the floor, the picture below was taken:

#NEW A Greenville ISD teacher is on administrative leave after a “staged photo” shared online showed the employee placing her foot on a student’s neck.

The family of the boy shared this photo with me. pic.twitter.com/SWkvnkXDSo

The student’s mother said that she received the picture from the teacher personally and that she recognises it was intended to be a joke. In a Facebook post written Friday - the same day the school district met to call for her resignation - the mother claimed that she had a "genuine friendship" with the teacher, stating she has a "heart of pure gold" and should keep her job.

Nevertheless, the photo was deemed inappropriate and offensive, with the similarities to the George Floyd case apparent. The Greenville Independent Schools District has apologised to parents and students for "the distress this incident has caused by the incident". You can see the full statement below:

popular
Tens of thousands rush to sign-up to 'Enough is Enough' campaign - crashing their website
Tourists left 'squealing' as thousands of venomous crabs invade UK beach
TikTok investigating Andrew Tate after users demand he’s removed from platform
Stranger Thing's star Noah Schnapp slides into Love Island's Ekin-Su's DMs
Runner finishes last in 400m race as penis keeps falling out of shorts
Mum learns paedophile neighbour took over 50 pictures and videos of her as she sunbathed
Boris and Carrie put south London home on the market for £1,600,000
You may also like
News
Man killed after being hit by same bullet he shot woman with
News
Heartbreaking reason cop at school shooting was looking at phone while gunman killed 21
News
Dad shoots teens trying to steal car with two young kids inside
News
Pregnant woman claims fetus counts as passenger in attempt to get out of ticket in US
News
Texas inmate on death row asks to delay execution so he can donate a kidney
Next Page