The American singer-songwriter Lady Gaga has said that she was raped aged 19 by a music producer who "dropped [her] off pregnant on a corner" after months of abuse.

END_OF_DOCUMENT_TOKEN_TO_BE_REPLACED

The Oscar winner appeared visibly upset as she told her story on the first episode of The Me You Can’t See, a new Apple TV+ mental health docuseries, which was co-created by Prince Harry and Oprah Winfrey.

Gaga said that she had self-harmed since she was "really young" and that many of her mental health struggles come from the traumatic ordeal she experienced when she was an aspiring music artist.

She said: "I was 19 years old and I was working in the business and a producer said to me, 'Take your clothes off'." "I said no, and I left, and they told me they were gonna burn all my music. And they didn’t stop...they didn’t stop asking me and I just froze and I just...I don’t even remember."

As the singer broke down in tears, she said that she will not name the producer in question.

END_OF_DOCUMENT_TOKEN_TO_BE_REPLACED

"I understand this #MeToo movement, I understand that some people feel really comfortable with this, and I do not," she added. "I do not ever want to face that person again. This system is so abusive, it’s so dangerous."

Gaga said that she suffered a "total psychotic break” years after the trauma she experienced. She said that she was in an "ultra state of paranoia", which led her to cancel some dates of a world tour.

The singer-songwriter said that she was sick for weeks after the traumatic event took place.

She said: "First I felt full-on pain, then I felt numb, and then I was sick for weeks after. I realised that it was the same pain that I felt when the person who raped me dropped me off pregnant on a corner [by] my parent’s house, because I was vomiting and sick. Because I had been being abused, and I was locked away in a studio for months." 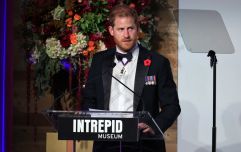 END_OF_DOCUMENT_TOKEN_TO_BE_REPLACED

Gaga said that it took her over two years to recover.

Speaking about her decision to tell her story, she said: "I'm not here to tell my story to you because I want anybody to cry for me. I'm good."

"But open your heart up for somebody else. Because I'm telling you, I've been through it and people need help. So, that's part of my healing, being able to talk to you."

The new show is available to stream on Apple TV+ from today.