Reports suggest she will appear via video conference on Wednesday

Supermodel Kate Moss is due to take the stand and be questioned about her four-year relationship with Johnny Depp. 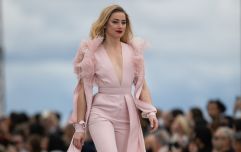 END_OF_DOCUMENT_TOKEN_TO_BE_REPLACED

As Johnny Depp's $50m defamation case against ex-wife Amber Heard continues, with Heard also countersuing for $100m, it's believed that Kate Moss will testify on Wednesday, May 25.

According to the New York Post, the 48-year-old model will be summoned by Depp's legal team and will give evidence via video call.

Moss' name has been mentioned a few times since the trial began on April 11, with Amber Heard, 36, most recently recalling an incident between Depp, 58, and her sister Whitney.

Whitney was allegedly "in the line of fire … trying to get Johnny to stop", which reminded her of another incident involving Moss.

"[Whitney's] back was to the staircase, and Johnny swings at her," Heard explained. "I don't hesitate, I don't wait — I just, in my head, instantly think of Kate Moss and stairs."

Moss has never accused Depp of pushing her down the stairs.

Entertainment lawyer Mitra Ahouraian told the Post: "That's one mistake that [Heard] made, was bringing up Kate Moss, which potentially opened the door to [Depp's team] bringing [Moss] on as an impeachment witness" — and Moss "saying 'This never happened'."

END_OF_DOCUMENT_TOKEN_TO_BE_REPLACED

Usually, unrelated and alleged misconduct can not be evoked by lawyers as evidence, but Heard may have shot herself in the foot by bringing it up. Now, Depp's team can refute the claim by calling Moss for questioning. Hence why Depp's counsel Benjamin Chew looked to shake his fist in victory after Heard's statement.

But things aren't quite that simple, and legal experts told the Post that Heard's team could argue that mentioning Moss was simply to explain Heard's "state of mind" at the time. The Judge could deny the request as well on the grounds that it does not pertain to a relevant incident.