Courtney Love has spoken out about the time Johnny Depp saved her life with CPR after she overdosed outside Los Angeles iconic,  Viper Room.

In a series of videos shared on Love's friend, Jessica Reed Kraus’s Instagram account, the singer expressed support for Depp who is embroiled in a defamation case against his ex-wife, Amber Heard. The actor is suing Heard for $50m over a 2018 op-ed she wrote that he believes infers he physically and sexually assaulted her. Heard is counter-suing for $100m. 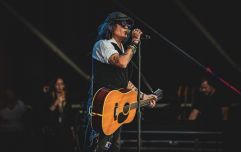 END_OF_DOCUMENT_TOKEN_TO_BE_REPLACED

“I don’t really wanna make judgments publicly, but I just want to tell you that Johnny gave me CPR in 1995 when I overdosed outside the Viper Room with Sal,” Love says in the video, while adding that the Pirates of the Caribbean star has also supported her daughter, Frances Bean Cobain, while she was suffering from addiction.

“Johnny - when I was on crack and Frances was having to suffer through that with social workers – wrote her a four-page letter that she’s never showed me on her 13th birthday. He didn’t really know me," Love explained in the clip.

“Then he sent limos to her school when the social workers were crawling around – again, unasked – for her and all of her friends.”

END_OF_DOCUMENT_TOKEN_TO_BE_REPLACED

While speaking out in support of Depp, Love added that she also sympathised with Heard as she’d also been “the most hated woman in America before TikTok".

“I have a lot of empathy for what that must feel like for Amber. F*** man, wow, can you imagine being her?”

Kraus clarified in a follow-up Instagram Story that while some of Love’s posts were meant to be shared publicly, some had been shared by accident.

END_OF_DOCUMENT_TOKEN_TO_BE_REPLACED

Love later said: “The platform accidentally posted a story I didn’t want public. I want to show neutral support for a friend. I don't want to bully.

“The only important takeaway, of what was posted, is that I expressed that we should all stop having ‘fun with schadenfraude’ (look it up: ‘Delight in another’s down fall’) and show sincere empathy for both parties. If I hurt anyone, please accept my amends.”

Love is the latest in a string of celebrities to speak out on Johnny's behalf. Others have included his ex-partner Winona Ryder, Javier Bardem, and Sia, as detailed by The Independent.