The ringleader of a group behind a series of disruptive M25 protests stormed off national television on Wednesday after being challenged about insulating his own home. END_OF_DOCUMENT_TOKEN_TO_BE_REPLACED

Insulate Britain's Liam Norton walked off Good Morning Britain's set after being quizzed by Susanna Reid and Richard Madeley in the wake of an announcement that the group could face jail over the protests that have caused travel chaos on five separate occasions during the last nine days.

The electrician, whose group wants the government to pay to insulate social housing, called time on the interview when questioned about whether his own home was properly insulated. 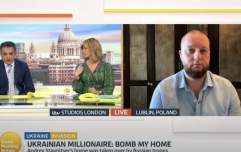 END_OF_DOCUMENT_TOKEN_TO_BE_REPLACED

Norton's London home, MailOnline reported, is single-glazed, has no cavity wall insulation, and uses gas central heating, and is owned by a housing association.

Asked why he had not insulated the property himself, Norton said: "Whether or not my home is insulated doesn't change the fact that millions of people's homes are not insulated."

Reid then asked: "So you are saying you would risk your life, your life, for Insulate Britain, but you aren't going to insulate your own home?'"

Norton: "What we are talking about is the future of our country. Our country is going to be destroyed if we don't get this sorted out.'"

END_OF_DOCUMENT_TOKEN_TO_BE_REPLACED

When pushed further on the matter, Norton told the hosts that insulation costs "thousands, tens of thousands".

Asked if he could not afford to insulate the property, Norton said: "No, what I'm saying is millions of people around the country cannot afford to do it."

Norton was also quizzed on the tactics employed by his protest group. One protest led to a mum who had a stroke ending up paralysed after her son's attempt to take her to the hospital was delayed for hours.

Norton admitted he had lost sleep over the incident, but when pressed on why the group continued, he said: "The future of this country is at stake."

As Norton became irritated and got up to leave, Madeley, farewelled him with a 'bye', before mocking him for comparing the group's support to that of Winston Churchill prior to the Second World War.

Norton had earlier said: "In 1937, do you know how many MPs support Churchill when he was trying to fight Hitler? Six MPs. Six MPs supported him. And Churchill was right."

Invading a motorway is reckless & puts lives at risk. I asked National Highways to seek an injunction against M25 protestors which a judge granted last night. Effective later today, activists will face contempt of court with possible imprisonment if they flout.

As Norton was seen leaving the GMB set, Madeley said: "So ladies and gentleman, we now know these protesters are following in the footsteps of Winston Churchill.

"That's the level of intellectual debate that they are able to bring to the table. They actually compare themselves to the stand Winston Churchill took against Hitler. What do we make of that intellectual stupidity?"