Sneak peek at Fast and the Furious 450: The Tesla Takeover

In an act not unfamiliar to anyone who’s played Grand Theft Auto, shocking video shows a rented Tesla taking off only to crash into a bunch of parked cars and trash cans. 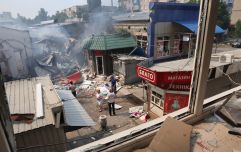 END_OF_DOCUMENT_TOKEN_TO_BE_REPLACED

Posted by the Lost Angeles Police Department (LAPD) on March 20, video footage captures a “dangerous stunt” in the city’s Echo Park area. A 2018 Tesla S-BLM is seen flying through the air at Baxter and Alvarado streets before coming crashing to the ground and into several garbage bins and two parked vehicles.

The rented vehicle was abandoned at the scene and now the LAPD are searching for the driver who faces misdemeanour charges.

“It never should’ve been done,” LAPD Detective Juan Campos told KTLA. “I don’t know what they were thinking. It could’ve gotten somebody killed.”

A nearby resident, Jordan Hook, claimed that the Tesla slammed into the back of his car.

“Neighbours immediately started showing me videos of several Teslas that came down the hill following the one that jumped and crashed and they piled out of that crash,” he told KABC.

END_OF_DOCUMENT_TOKEN_TO_BE_REPLACED

Another resident of Echo Park, Jonathan Sutak, told the news station that he woke up to a headlight shining at his front door and “broken up garbage pails strewn everywhere.” Neighbours witnessed the passengers from the crashed Tesla jump into another vehicle with men who had been recording the stunt.

On social media, Youtuber Alex Choi shared clips to his 970k followers on Instagram, where one user wrote: “Now THAT is some “Fast and Furious” vibes.”

Investigators have received more than 50 tips, from which they have identified a “person of interest” that seemingly match social media posts.

“We have reached out to him on his social media account,” the LAPD’s Central Traffic Division tweeted. “We are asking any witnesses to also come forward.”

The police are offering a $1,000 reward for information leading to the identification of the driver.

popular
Love Island extended tonight for ‘most dramatic and explosive Casa Amor ending' in show history
Dad who left partner for Ukrainian refugee is now her full-time carer after she became partially blind
Chelsea set to hijack Frenkie de Jong deal, offering two players plus cash
British Airways jet catches fire as passengers and crew are evacuated after flight from London
Premier League club faces call to suspend international player over rape allegations
Boris Johnson says he is 'so sad to give up the best job in the world'
‘Bye, bye Boris’ song playing in the background of PM’s resignation speech is the finale we all needed
You may also like
Entertainment
The Flash fans want Elliot Page to replace Ezra Miller
News
Brit on holiday beaten with a brick by gang before being thrown in the sea unconscious
News
Moment fighter jet appears at the wing of easyJet flight after teen passenger ‘made bomb threat’
News
Jayland Walker: Shocking police bodycam shows officers shoot Black man over 60 times
Crime
Man convicted of murder after victim named him with dying breath
Next Page