Guys. Guys. GUYS, relax. It's fine, the billion dollar company is definitely not in the wrong here. There's no way that video shows them brutally assaulting a passenger to get him off the plane for no valid reason. We are all simply mistaken.

END_OF_DOCUMENT_TOKEN_TO_BE_REPLACED

It's likely that United Airlines' PR team are currently scratching their arses trying to come up with some sort of bullshit explanation for what happened. They're flustered, but I can help. I've drafted some very believable excuses that they can use if they're really stuck. No questions asked, no money needs to be exchanged hands. This is an act of kindness.

Here's 5 extremely plausible explanations that you'll likely see from their spokesperson in the coming days.

1. They were playing 'Light as a feather, stiff as a board'

United Airlines wishes to shed light on the incident that occurred on board flight 3411. Folks, the videos are misleading. It's very clear that a fun-but-controlled game of 'Light as a feather, stiff as a board' was taking place between the officers and passenger in question. Due to the limited available space on a Boeing 777 aircraft, they began the ceremony as he was seated and then simply moved him to the aisle. 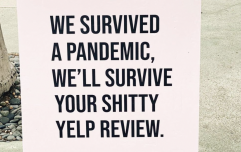 END_OF_DOCUMENT_TOKEN_TO_BE_REPLACED

Although it may appear that the passenger was being moved against his own free will, that is simply not the case. The noise coming from himself and his fellow passengers is merely the sound of disbelief that this ancient tradition has yet again managed to work. The officials were using their index and middle fingers to lift him and it worked incredibly well. While United Airlines does not publicly endorse dabbling in the occult, on this particular occasion, it clearly was an enjoyable spectacle for all.

2. The video you saw has been heavily edited and definitely reversed

United Airlines would like to set the record straight regarding the events that unfolded on Monday 10th April, 2017. The videos that emerged online were clearly edited, as our experts can and will attest to. These clips have all the characteristics of an edit, the sound is muffled, the visual quality is poor and they start and end at very convenient points. It's likely that these internet terrorists have used a green screen, or potentially 3D technology to put us in a negative light.

END_OF_DOCUMENT_TOKEN_TO_BE_REPLACED

We are most certain that some of the videos circulating the internet have been reversed. As you can see in the corrected version above, the United Airlines officials were blatantly assisting this man to his seat after he became confused and disoriented once he boarded the flight. They tenderly ushered him down the aisle and to his correct seat on the plane. If anything, these officers are heroes and we should be commending them for their valiant actions.

Here at United Airlines, we are firm believers in the power of social media. We saw the huge mess that Pepsi made last week and oh boy we just couldn't wait to get our hands on some of that sweet, sweet outrage nectar. So we made the entire thing up. The Asian man? An actor. The forceful men? Actors. The passengers? Actors. The shaky camerawork? A fully paid videographer - we're actually pretty annoyed about the finished product.

We planned this flash mob for months, everything was rehearsed and strategically put in place for this to happen. The haters and trolls fell right into our trap with their outrage. We clearly have the upper hand here, as just to reiterate, this was all definitely planned. Our PR people are sipping piña coladas in Bora Bora right now, that's how planned this all was. We're not idiots, we know everyone films everything nowadays, of course this was just a flash mob to demonstrate how bad an airline could actually be, like American Airlines or Delta - haha, those idiots!

United Airlines would like to make the following statement in relation to the events that unfolded yesterday:

Thank you. We will not be accepting questions from the public at this time, or any time in the future.

In a bid to clarify what happened on board flight 3411, United Airlines would like to publicly state that we believe Freddos to be overpriced. Although some may accuse us of diversion tactics in this instance, we would like to assure the public that this is absolutely not the case. We are merely addressing an issue that has received little media attention in recent times and is fully deserving of a worldwide investigation.

We are currently in a situation where one Freddo (18g weight) is costing the consumer 30p. This nothing short of an outrage and we, as a billion dollar company, cannot turn a blind eye to such grave issues that are affecting the public. With the implications of Brexit growing more severe with each passing day, it's time we take a stand and fight for what's really important in this modern age - affordable chocolate.

popular
Bride asks for divorce day after wedding following groom's disrespectful cake stunt
Chelsea forced to change Stamford Bridge changing room after Liverpool complaint
McDonald’s has removed the ‘best item’ on its breakfast menu for good
Pierce Brosnan has the perfect response to trolls who attack wife's weight
Evan Rachel Wood claims Marilyn Manson ‘essentially raped her’ in music video
TikTok star Jack Wright accuses Sienna Mae of sexual assault
Katie Price could be jailed for five years after arrest on Friday
You may also like
Life
Grandmother, 61, and 24-year-old husband plan to have first baby together
Life
Husband divides opinions with Christmas meal hack to save on washing up
Health
Woman horrified after warts grew on tattoo and had to be burned off
Fitness & Health
Elite runner pooed down leg 7 miles into marathon and completes run in personal best time
Social Media
Twerking bride giving groom lap dance in thong has broken the internet
Next Page