For the first post-pandemic Halloween, how about choosing an outfit that isn't done to death?

With Halloween right around the corner, it's almost time to hastily throw a costume together at the last possible minute. Though many people manage to steal the costume spotlight year after year, others tend to dress up as the most predictable things imaginable - and it shows.

So, in a bid to save you some stress, here's five predictions for this year's most popular Halloween costumes alongside 10 outfits that are just, dead.

and the scariest costume goes to… pic.twitter.com/AgCXEeE7SX 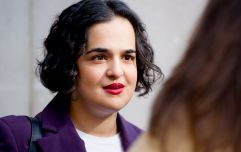 Nadia Whittome: Tory MP who said his £82K salary was 'grim' refuses to debate me

END_OF_DOCUMENT_TOKEN_TO_BE_REPLACED

The Karen costume went viral on Monday and it is easy to see why this simple outfit, with signature blonde wig and sunglasses, will be a hit this Halloween. For anyone who has slept through the last year or three - the term Karen is synonymous with white privileged women who are renowned for asking to speak to the manager and complaining about so-called 'PC Police'.

Both of these musical icons have stolen glances and hearts this year. Their unique sense of style that blurs the lines of typical gendered clothing will certainly be the focal point for many men looking to flex their androgynous side.

Squid Game has taken the world by storm in less than a month - and costumes have already begun popping up on both Amazon and eBay. Though the outfits themselves aren't exactly the most elaborate, they are instantly recognizable, probably because the world can't seem to shut up about the show.

Bernie Sanders broke the internet at Joe Biden's inauguration back in January when he showed up looking like a disgruntled father at his kid's rainy football match while sat amongst a sea of elegant individuals.

This outfit is ridiculously easy to put together - and you get extra points for being politically aware.

Marvel's original Disney+ shows have put superheroes front and centre. If Harley Quinn, the Joker or Superman are usually your go-to costumes - then perhaps opt for something a little more up to date?

Scarlet Witch is a top choice for obvious reasons but don't forget about the other, less-flashy characters like Cap's pal Bucky Barnes, Loki heroine Sylvie and of course the new Captain America himself, Sam Wilson.

There's arguably no Halloween sight more predictable than witnessing a group of lads in their early 20s who are each wearing the same thing: a hastily ripped white Primark tee, sprayed with a generous amount of fake blood.

True Halloween veterans may even throw in some white contact lenses and call it a day - but as JOE readers, you know better than that - so put away Primark's finest and save it for a normal night out where you'll probably wear it with a pair of grey check trousers. Standard.

Harley Quinn and the Joker were the epitome of the 2016 Halloween costume scene - and while many couples looked incredible as the duo - seeing the words 'Daddy's Lil monster' got really old, really quickly.

With each new film to feature Margot Robbie's sassy clown princess of crime, Harley Quinn, came a new round of costumes making their way onto Halloween-themed Facebook photo albums.

Sadly, Harley Quinn is already one of the most-searched-for costumes this year, reports clothing brand NastyGal. So far, 90,500 people have searched for Harley Quinn costumes in September alone.

You'd think spending the past few years seeing Trump's big orange face in every official US news announcement would set you up for the next decade or more - and yet, he still tends to pop up each Halloween without fail.

It was funny the first time and maybe the second - but five years on and it's getting a little boring to see Mr Cheetos every October 31.

If done right, Pennywise is a brilliant costume. However, it goes without saying that being in a room full of scary clowns kind of detracts from the fear factor a little.

As if encountering a muddle of murderous clowns wasn't bad enough, there's that one girl who thinks a sexy Pennywise is exactly what we have all been missing in our lives. No one - and we mean no one - has looked at Pennywise and thought: 'Damn, I want a piece of that'.

Cats do have nine lives - but going as a sexy cat nine years in a row is taking the p**s a little. It gets 10 times worse when an entire friend group clads themselves in cat ears and black leotards. We get it; whiskers are cute, now let's move on.

But despite the Cat being a much-overdone costume choice, there have been just under 50k searches for the outfit in September. Do you really need a costume though? Eyeliner for whiskers, cute ears, and a leotard- done!

It may be easy to paint the 'T bird' logo on the back of a leather jacket but that doesn't mean you should do it. If not done right, then people automatically think you are the ghost of Elvis Presley - and let's be honest, 90 per cent of men cannot move their hips like John Travolta.

Take the bright pink Frenchie wig out of your Amazon basket because unless you are shelling out obscene amounts, it's going to fall halfway off your head while you are crying at the end of the night because the boy dressed as a soldier isn't actually a soldier, he works in I.T.

The hippie ethos of 'make love not war' is all well and good until your missus is chatting up a lad dressed as a zombie and you abandon that mantra to batter him. More so, with most Urban Outfitters looking as if they stock their stores with clothing pulled straight from the '60s, people might think you're just wearing everyday clothes.

Despite the countless articles each year that explain why it's really not okay to dress up as a Native American, in headdresses, in Kimonos, as Princess Jasmine or Pocahontas - people sadly still do and it's all-round just a poor option.

With a plethora of other picks available, there really is no excuse to be mimicking another culture purely for sh*t's and giggles.

Everyone loves Stranger Things, as evident by most Halloweens when everyone's sister, aunt, and best friend are dressing up as Millie Bobby Brown's super-powered Eleven.

It must be mandated by law that everyone owns at least one Hogwarts robe because come October 31, the amount of Hermione, Draco, and Harry not-so-look-a-likes strutting the streets is almost dizzying.

That's before you even hit the dance floor, where everyone is using their wands as a prop to bust a move. Top Tip: No one is touching your wand if you are dressed as The Boy Who Lived.

NastyGal says that Harry Potter costumes have been searched for 49,500 times.

As it's our first Halloween post-pandemic, how about we opt for a Halloween costume that hasn't been done to death?

But be warned: that doesn't mean you can grab the nearest disposable mask and go as quarantine bae, the vaccine - and definitely not the World Health Organisation - unless you want people to ignore your advice.

This is the most haunted pub in Britain