This is desperately unfortunate.

According to BBC, a young Muslim boy in Lancashire was questioned by police after he mistakenly referred to his "terrorist house" during an English lesson. 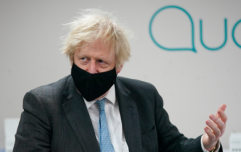 R-rate goes up slightly across the UK

END_OF_DOCUMENT_TOKEN_TO_BE_REPLACED

The boy, who has not been named in the media, had meant to say "terraced house".

Teachers are legally required to report anything that arouses their suspicions, so the police were called to interview the child.

Speaking to the BBC, the boy's cousin said: "You can imagine it happening to a 30-year-old man, but not to a young child.

"If the teacher had any concerns it should have been about his spelling. They shouldn't be putting a child through this. He's now scared of writing, using his imagination."

The story is reminiscent of US pupil Ahmed, the young boy who was arrested by police after a clock he made himself and brought into school was mistaken for a bomb.

Hopefully the schoolboy in question wasn't too traumatised by what must have been a worrying ordeal.

popular
What Netflix’s Seaspiracy gets wrong about fishing, according to a marine biologist
Jake Paul accused of sexual assault by TikTok star Justine Paradise
People fighting over name of game where you knock on someone's door and run away
Man faces three years in jail in Dubai for legally smoking marijuana in his own country
QUIZ: Can you get 20/20 in this desperately tricky capital cities quiz?
Flatpack expert charges people to assemble Ikea furniture after job loss
Covid lockdown 4: Could it really happen and how can we prevent it?
You may also like
Sport
Man Utd players "had their own unit" with England, David James and Joe Cole recall
Sport
England's game against Albania on Sunday could be cancelled
Sport
Twitter reacts as Trent Alexander-Arnold is dropped from England squad
Sport
Six Nations referee admits to errors during England's loss to Wales
Sport
Ellis Genge reveals death threats received after England's loss to Wales
Next Page