Loot boxes are possibly the most annoying thing in gaming

Instead of getting all the cool stuff in a game because you play it loads, or are, y’know, good at it, you have to pay money for a virtual packet of stickers, and hope there is something good inside. 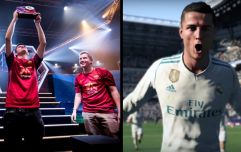 END_OF_DOCUMENT_TOKEN_TO_BE_REPLACED

The debate about loot boxes goes further than that though. Maybe people have argued that they are actually gambling, and therefor would fall under certain legal restrictions – particularly meaning that they can’t be sold to children.

Earlier this month, the Netherlands declared that they were indeed gambling – and now Belgium has followed suit, and declared them illegal. The Belgium Gambling Commisson looked at Commission looked at Star Wars Battlefront 2, FIFA 18, Overwatch and Counter-Strike: Global Offensive. Battlefront 2 escaped unscather, after EA notoriously scrapped them from the game after gamers complained. They however judged that as FIFA 18, Overwatch and Counter-Strike’s loot boxes were games of chance, they were therefore gambling.

The Commisson then said that the boxes must be removed from those games, otherwise publishers could face "a prison sentence of up to five years and a fine of up to 800,000 euros". And that can be doubled if children are involved in the offence.

"Given the importance of the protection of minors and vulnerable players, this was very worrying.

"We have already taken numerous measures to protect both minors and adults against the influence of, among other things, gambling advertising. That is why we must also ensure that children and adults are not confronted with games of chance when they are looking for fun in a video game."

popular
Amber Heard's lawyer becomes annoyed as Johnny Depp's team interrupts her testimony multiple times
Liverpool fans were right to boo the national anthem
ITV's The Chase star opens up on divorce from ex-wife who is his cousin
Boris Johnson slams Jurgen Klopp for defending Liverpool fans booing national anthem
Lip readers analyse what Johnny Depp’s lawyer told him as they celebrated in court
Doctor Strange star jailed for eight years over child sex offences
Hilarious moment pilot is forced to climb into cockpit through window after 'getting locked out'
You may also like
Sport
FIFA 18's World Cup mode features the Iceland 'Viking' clap celebration
Entertainment
QUIZ: Identify the FIFA game from a single screenshot
Entertainment
Making a simple change to your TV's settings will make you better at FIFA
Entertainment
QUIZ: Can you guess the FIFA game from the songs on the soundtrack?
Sport
Manchester United have launched a new kit...via FIFA 2018
Next Page