Game of Thrones star Hafthor Julius Bjornsson is one of the strongest men on the planet.

The 6ft 9in monster, who plays bloodthirsty behemoth Gregor Clegane in the TV series, is five-time Iceland strongest man, has two-time Europe's Strongest Man and has finished in the top three in the world


When he's not sparring Conor McGregor or crushing watermelons with his bare hands, he's breaking strength records for fun. 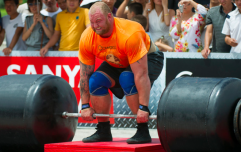 END_OF_DOCUMENT_TOKEN_TO_BE_REPLACED

He might be one of the biggest men we've ever clapped eyes on now, but it hasn't always been that way.

This is a photo of 'Thor' long before he was lifting Atlas stones for fun and generally being a big strong b*stard, back when he was playing basketball in Iceland as a regular 6ft 9in lad...


popular
Jenson Button on crashes, his Brawn fairytale and the rules of the road
The JOE Friday Pub Quiz: Week 179
The FootballJOE Quiz: Week 1
KNEECAP answer the most annoying questions Irish people get asked
QUIZ: Name the capital cities of these 30 countries
What will England's Euro 2020 squad look like?
DIEGO MARADONA: The making of the film on a defining chapter in the life of a football legend