Ronda Rousey used to fight men for money to fund an unusual addiction...

Ronda Rousey has revealed how she used to fight men for money just so she could drink Starbucks frappuccinos with her friend.

While Rowdy is now one of the biggest earners in UFC, she was once so short of cash that she could barely afford a delicious iced coffee.

But that's where her judo skills came in use.

"I loved frappuccinos," Rousey told Sports Illustrated. "Me and my friend, Jackie, after school we would walk over to the promenade.


"Jackie was like my Paul Heyman. She was like, 'I bet my girl right here could beat you up for 10 dollars, or five dollars, or whatever.' And some guy would be like, 'Whatever, I'll take that bet.' 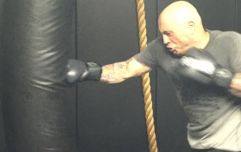 END_OF_DOCUMENT_TOKEN_TO_BE_REPLACED

That usually proved to be a mistake, with Rousey detailing how she'd take down her larger opponents.

"It would start, whoever the guy was I'd throw him to the ground and either give him a choke or an armbar," she continued.

"We'd get him to say that he gave up, then we'd take his money and go buy frappuccinos. Those were my first pro fights."


popular
The JOE Friday Pub Quiz: Week 197
A definitive ranking of every swear word from worst to best
Here's how to see who's been taking screenshots of your Instagram Stories
QUIZ: Identify the brand from just its slogan
21 British game shows ranked from worst to best
Can you identify the brand just from its logo?
19 words and phrases only true northerners will understand