"I've been eating a lot of cakes, sugar. It's my present."

Oleksii Novikov recently won World's Strongest Man for the first time in his burgeoning career. At the age of 24, the Ukrainian is the youngest man since Jón Páll Sigmarsson to hold the title.

END_OF_DOCUMENT_TOKEN_TO_BE_REPLACED

Interestingly, he is also among the smallest - but you wouldn't think that when looking at him.

A little over six foot, Novikov weighs 135 kilograms, or just under 300 pounds if you're reading this from across the pond.

Stood next to behemoths of the strongman game such as Eddie Hall, Brian Shaw and Hafthor Bjornsson, Novikov would be dwarfed. But his stature didn't hold him back as he soared his way to the strongman summit at the 2020 finals in Bradenton, Florida.

"I got used to being the lightest and the youngest," he said, speaking exclusively to JOE.

On the very first day of World's Strongest Man, Novikov set the tone for the rest of the competition. He smashed a new world record in the 18 inch deadlift, pulling a whopping 537.5 kilograms.

END_OF_DOCUMENT_TOKEN_TO_BE_REPLACED

He agrees, to an extent, with fellow competitor Robert Oberst - who once told Joe Rogan that the deadlift is somewhat overrated as an exercise.

"I agree with this [Oberst's comments], same with log lift, but one of the most interesting events in strongman is the farmer's walk.

"With farmer's walk, you must show a good balance and coordination of all muscles."

At what point do you think Oleksii Novikov knew? 🤔 pic.twitter.com/LY6smtDh8u 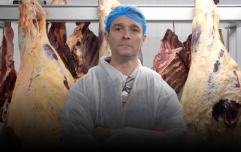 END_OF_DOCUMENT_TOKEN_TO_BE_REPLACED

That said, the 24-year-old still believes it's an important lift if you are to hold court among the big boys.

"It's a good show of absolute strength, and is good for the monster people," he said.

Diet provided the fuel as Novikov toppled the giants of the sport. Outlining everything he eats in a day, the Ukrainian says he gets by on around 7,000 calories during competition.

Regarding the number of meals consumed, he says it differs but: "Four is minimum, eight is maximum".

On certain event days, it may surprise you to learn that Novikov eats hardly anything.

He says "my stomach cannot take too much food" during particularly intense events. He will instead eat a small bowl of porridge with a banana, and make up the rest of his requirements with shakes and water.

Going without food on game day is quite common among top athletes. You don't want a massive amount of grub sloshing around your system - and that's without taking nerves into account.

Adrenaline is a known appetite suppressor.

Wolfing all this food down might strike you as an insurmountable challenge, but it's still some way off the Stoltmans.

Runner up at this year's event, Scotland's Tom Stoltman polishes off some nine to 10,000 calories a day.

Alongside his brother (and fellow strongman) Luke, the two Highlanders previously told JOE what they chow down on during a typical training day.

This is everything he and his brother eat with their 9,000 calorie-a-day diets 🍔 pic.twitter.com/Fs93Dpoycc

Outside competition season, Oleksii Novikov normally reduces his intake to between four and 6,000 calories per day. But a weight cut was not on the agenda following triumph at World's Strongest Man.

"It's a very long cheat meal," he laughs.

"I've continued until today. A lot of cakes, and sugar. It's my present."

The 24-year-old will continue to eat what he wants for the next seven days. After that, all attention will turn towards the next event.

Novikov will look to build on his success when he takes to the stage at the Arnold Strongman Classic later this year.