He gained several kilos of muscle mass over lockdown

One of the biggest talking points to come out of post-lockdown football has been Leon Goretzka's physical transformation. The Bayern Munich midfielder was previously very slight and slim, but reported back to training with several extra kilograms of muscle mass.

END_OF_DOCUMENT_TOKEN_TO_BE_REPLACED

He put this new size to use by brushing off Barca, Lyon and PSG on his way to lifting the Champions League trophy with the Bavarians. Not sure how much that thing weighs, but it's a beast of a trophy.

When Goretzka showed up on our screens, the discussion on social media was a mixture of awe and bemusement.

END_OF_DOCUMENT_TOKEN_TO_BE_REPLACED

There are a number of reasons why people are shocked by Goretzka's transformation.

How could he have improved his body composition (ratio of muscle mass to body fat) during lockdown, when all the world seemed to accept a degree of weight gain with all the gyms closed?

At the elite level of any sport, there's no 'I'll train when I feel like it' or 'I was gonna do a kettlebell session, but I put Game of Thrones on instead'. 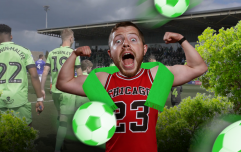 END_OF_DOCUMENT_TOKEN_TO_BE_REPLACED

You just get it done, no questions asked, whether you feel like it or not.

Another problem is information overload. At the touch of button, you have thousands of training programmes available to you. But where do you start?

The fitness industry has (arguably) deliberately confused people as to how you build muscle, lose fat and improve general fitness. Probably to make you think there's a 'secret' holding you back that you'll only learn once you've bought that new diet book or detox supplement.

What works is really, really simple.

And Goretzka didn't need to work out the answer for himself. He had the world class coaches at Bayern do it for him, and then simply tell him 'follow this'. Or 'folge dies', if Google Translate is correct.

Goretzka probably had access to a swanky home gym, or weights loaned to him by Bayern's strength and conditioning coaches.

His workout plan would have been based on the principle of progressive overload.

In other words, gradually increasing the weight you lift on an exercise as you get stronger. Benching 60 kilos for 12 reps? Add another 2.5 kilo plate each side and rep that out until it becomes easy.

The body will be forced to grow as a way of adapting to this new physical stress. Leading to muscle growth.

For those of you with training experience, this will be obvious.

But you'll be surprised how many people lose track of this, when they are constantly being told the 'secret' to getting in shape lies in a detox drink that basically just makes you go to the toilet a lot.

This state of confusion fools people into thinking any physical transformation is the result of something the layman doesn't know, or isn't told about.

Another fitness coach, Jonathan J. Marcus, wrote how undervalued the basics of fitness are nowadays.

If the basics are not taken care of, the bells and whistles matter little.

Goretzka must have been following a consistent training programme, getting sufficient protein and calories in his diet and sleeping and resting so his body could grow.

That's really all there is to it.

It's also worth remembering that a lot of the reasons people give for not realising their fitness goals will simply not apply to someone like Leon Goretzka.

That's how Goretzka did it, but an even bigger question has been 'why?'

You might be thinking, 'why did Goretzka bother gaining muscle when football is more about pace and endurance? Surely bigger biceps are only better if you play rugby, or are in the NFL?'

Rugby player Alesana Tuilagi is probably not a stranger to the weights room. (Photo: Getty)

At its heart, football is a very simple game, which is probably why it's so popular. But this simplicity makes any relationship with science or data uneasy.

Just look at the way managers who may not have played the game, or who base their philosophy on hard analytics, are derided as 'laptop managers'.

It's a similar situation with strength and conditioning. Football players and fans used to think the only form of physical training you needed to do was running, as that's what the sport relies on.

Then, Arsene Wenger took over as Arsenal manager in 1996.

Out went the junk food diet and haul of midweek pints. Doing laps of the pitch until you spewed your guts up went with it too.

Instead, Wenger brought in a new style of cardio training called Tabata. Named after the professor who popularised it, this surprisingly short form of cardio was used to great effect by China in the 1996 Olympics. Arsenal's fitness levels subsequently went through the roof.

Eventually, teams caught up with Arsenal, but only because they adopted Wenger's methods. Nowadays, all teams use an array of cardio training. All teams work with an in-house nutritionist. And all teams send a scout to watch Ajaccio v Le Havre in the hope of spotting the next 17-year-old wonderkid. Probably.

It became clear that, to improve a player's explosive power and strength, lifting weights was essential. Bench pressing and deadlifting aren't there for the sole purpose of trying to look like Arnold Schwarzenegger. They possess a real, functional benefit in football.

This doesn't mean lifting weights will make a player technically better at football, but where an extra yard of pace or ability to hold off defenders could prove the difference, the benefits are obvious.