And while he can definitely handle himself, he leaves the fighting to the professionals and, instead, breaks down the intricacies of what takes place in the Octagon.

A Brazilian Jiu-Jitsu black belt and former champion kickboxer, Rogan knows almost all there is to know about martial arts and he's been a part of the UFC family since UFC 12 in 1997.

END_OF_DOCUMENT_TOKEN_TO_BE_REPLACED

He went from interviewing fighters backstage to the most famous colour commentator in the business and, in the process, he did some considerable bulking up.

As he approaches his 50th birthday, Rogan knows that discipline is key if he is to keep himself in such excellent physical condition.

"I schedule my workouts every Sunday," Rogan explained on the most recent episode of his podcast. "I schedule everything that I'm going to do during the week.

"The only exceptions are injuries and sickness. That's the schedule.

"On top of that, there are other things that I enjoy doing like kickboxing and Jiu-Jitsu. I work those in when I can.

"The diet is pretty strict in terms of no bread, very few carbs, no sugar, no bullshit. Healthy food, a lot of vegetables and a lot of game meat, mostly wild game. 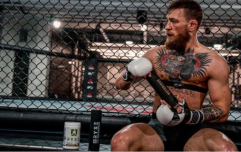 END_OF_DOCUMENT_TOKEN_TO_BE_REPLACED

"I do everything that I can to put my body and my brain in a good place so I'm keeping my engine smooth. I'm changing my oil, I'm changing my spark plugs and I'm making sure that it's operating. It's not going to be perfect but I know that I've done my best to keep it operating to the best it can."

A lifelong athlete, Rogan has put on considerable size thanks to a dedicated weightlifting programme, primarily using kettlebells, and he recently discussed how he approaches lifting.

"I follow the Pavel Tsatsouline protocol," Rogan said. "Where say if I can do 10 reps of something, I never do 10. I do five.

"If I'm doing something heavy. Like if I'm doing 90lbs clean press squats where I'm holding 90lbs over my head, I could probably do 10 of those but I'll only do four or maybe five.

"I don't go to failure. I don't believe in going to failure. What I think you're best off doing is less repetitions but more often. So instead of doing one day where you blow your whole fucking system out and you do 'ONE MORE BRO, COME ON. ONE MORE!!' And then the next day you can barely walk.

"You do that consistently and you get stronger and stronger so that's mostly what I do."