'World biggest burger' might be an exaggeration but still

Online prankster @yourajokeman, real name Jordan Adams, has ruffled a few feathers in one of his latest online prank videos involving a group of vegans and a heavily carnivorous meal.

Adams takes dares from his some 776,000 TikTok followers on which prank he should do next and about a week ago, one of them dared him to eat "the world's biggest burger in front of vegan protestors". He obliged, of course.

As you can see, while it is unclear what protests he attended and where, he does turn up - burger in hand - in front of some demonstrators (some pictured in Anonymous masks) and tucks into his burger. 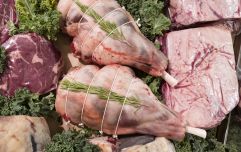 Red meat consumption drops 17% in a decade, but it's not enough

END_OF_DOCUMENT_TOKEN_TO_BE_REPLACED

What follows are a number of awkward exchanges with several protestors, clearly made as uncomfortable as the prank intended. One protestor involved even tries to rope in a pair of police officers parked next to the demonstration, as he points to a takeout burger box and says, "that's a fineable offence init?" - accusing Adams of littering.

Adams then defends his actions under the guise of "promoting good meat" before the camera cuts to another individual who asks him "are you proud of what you are doing?" - to which he simply responds, "yeah, I am".

After calling his prank "pathetic", the cameraman then rebukes: "you guys are promoting your thing - can't we promote ours?"

popular
Some Stranger Things fans are now trying to cancel Metallica
Tens of thousands rush to sign-up to 'Enough is Enough' campaign - crashing their website
Pete Davidson in 'trauma therapy' after being 'triggered' by Kanye West's harassment
Olivia Newton-John and John Travolta revisited Grease characters in 'fantastic' final outing
Runner finishes last in 400m race as penis keeps falling out of shorts
Man shows aftermath of crazy waterslide jump which went viral
'Empty Old Trafford' trends as Man Utd fans look to send Glazers a powerful message
You may also like
Food
Pictures of notorious Chinese takeaway that put the 'Grim in Grimsby' released
Life
Asda slammed for 'embarrassing poorer families' with new product redesign
Life
Simple hack will bag you a Nando's meal for under £6
News
Gordon Ramsay TikTok prompts PETA calls for his kids to 'disown' him
News
Tesco is encouraging shoppers to pay £2.49 fee once a month to save money
Next Page