'What they are doing is wrong'

People in Cambodia have been asked by the government to stop picking a rare carnivorous plant that looks a lot like part of the male anatomy.

END_OF_DOCUMENT_TOKEN_TO_BE_REPLACED

The Cambodian Ministry of Environment made a plea on Facebook earlier this month for people to stop picking the pitcher plants, which are officially called Nepenthes bokorensis.

The ministry shared images of three women snatching up pitcher plants and posing with them.

"What they are doing is wrong and please don’t do it again in the future! "Thank you for loving natural resources, but don’t harvest so it goes to waste!" the post read. 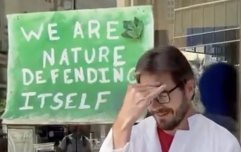 END_OF_DOCUMENT_TOKEN_TO_BE_REPLACED

The government in Cambodia has previously had to ask tourists not to pick both of these plants, releasing a statement in July 2021 saying doing so could drive the plants towards extinction.

Botanical illustrator François Mey said that bokorensis pitchers smell "sweet - just like candy" so that they can attract flies, who then fall into a pool of digestive fluids.

Mey told LiveScience that although they do admittedly have a funny shape, picking them could jeopardise the species' survival.

"If people are interested, even in a funny way, to pose, to make selfies with the plants, it's fine," he said. "Just do not pick the pitchers because it weakens the plant, because the plant needs these pitchers to feed."

popular
The JOE Friday Pub Quiz: Week 308
Multiple fatalities after planes collide mid-air over airport
Former Playboy Bunnies detail what it was like having unprotected orgies with Hugh Hefner
Pilots fly over destination airport at 37,000 feet - because they were both sleeping
Incredible case of the only known individual whose parents were two different species
Mum cuts off boyfriend's 'private parts' after he 'tried to rape 14-year-old daughter'
Man plunges to his death after drawbridge opens as he was crossing it
You may also like
Environment
This 'jaw-dropping' animation shows how many coffee cups are sold every second in the UK
Life
Video shows protestors smash windows and graffiti 'tell the truth' at News UK
Life
Apocalyptic scenes as train grinds to a halt in the middle of blazing wildfires
Entertainment
Greta Thunberg demands 'justice' in inspiring speech on climate crisis at Glastonbury 2022
Life
Climate activists hoping to 'strike fear' into drivers won't stop - even if they cause accidents
Next Page