He's also become a dad for the first time!

The 26-year-old, who attended the event with his sister and co-star, Sophie Sandiford, revealed the news to The Mirror shortly after telling the publication he had become a dad for the first time after Paige gave birth to a baby boy.

Pete told OK!: "I'm married now! It was nerve-wracking but the best day of my life. Well, second-best day as I’m a dad now, too. 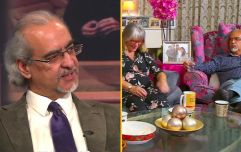 END_OF_DOCUMENT_TOKEN_TO_BE_REPLACED

Pete told the publication that his son was "basically a miniature version of me and Paige" and added that he feels "well lucky".

The TV favourite confirmed his engagement to Paige during an episode of Gogglebox in February.

Sophie had asked her brother: "Do you feel any different now that you've got engaged?"