It comes as Miller faces a number of accusations, following multiple arrests

A video has resurfaced showing Ezra Miller offering to "knock out" a store worker as the actor continues to make headlines for all the wrong reasons.

In the TikTok, The Flash actor can be seen stood next to the store worker, who nervously laughs after Miller demands an answer about whether they should assault him.

Ezra Miller and the store worker he offered to "knock out" (Credit:: TikTok @peterknight2800)
Advertisement

The video has been viewed over 5 million times since it was reposted on Sunday. "I just wanted a picture dawg!"  @peterknight2800 captioned the post. 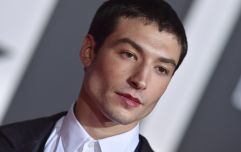 END_OF_DOCUMENT_TOKEN_TO_BE_REPLACED

The clip starts with Miller, 29, saying: "It's an option I present people, always."

"I can always just knock you out and then you won't have to panic," he adds.

"You just let me know,' Miller replies, to which the worker says, "yeah."

Staring at the worker, Miller says, "You just let me know, no, yes?"

"What?" the store worker adds, before the clip ends.

The DC star is facing accusations of manipulating and grooming an underage fan, in the latest controversy surrounding them. A 12-year old and a mother were granted a temporary harassment prevention order against the actor, after Miller allegedly menaced the family and acted inappropriately toward the nonbinary child, The Daily Beast reports.

In March, Miller was arrested while on holiday in Hawaii for harassment and disorderly conduct at a karaoke bar, as well as for an alleged assault at a private event. In just three weeks, the Perks of Being a Wallflower star was the subject of 10 police calls in Hilo, Hawaii.

Shortly after midnight on Monday, March 28,...

These aren't the only occasions Miller has been caught up in the middle of a controversy. In 2020, a video of the actor appearing to choke a female fan in Iceland went viral.

Miller has already appeared in many of DC's ensemble superhero films, and is set to star in the standalone The Flash movie in 2023. But sources have claimed that, even if no more allegations surface, Warner Bros is unlikely to keep Miller in the Flash role.