As another year rolls to a close, it's sadly inevitable that there are a few much-loved names we've lost over the past 12 months.

Comedian Sean Lock, actor Helen McCrory and freedom fighter Desmond Tutu were just a few of the famous faces that passed away this year.

Below we remember some of the celebrities we've sadly lost this year - and their lives. Of course, this is by no means a complete list of people that have passed away in 2021, just a handful of the talented people taken from us throughout an eventful year. 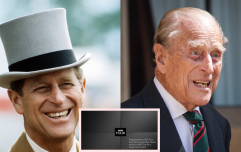 END_OF_DOCUMENT_TOKEN_TO_BE_REPLACED

You may know John Madden from the Madden NFL games rather than for the man himself. The legendary American football coach helped devise Madden NFL, the only official American football video game, first created in the 1980s. It has since grossed over four billion dollars worldwide. Aside from giving his name to video games, Madden was beloved for his iconic football commentary which was simple and unpretentious. He began coaching in the 1960s but retired aged 42 when he gave his time to commentary and video games.

Sean Lock was an 8 Out of 10 Cats comedy veteran. He sadly died this year aged just 58 after a private battle with cancer. The comedian, known for his deadpan jokes, was one of the most loved comics in the country, adored by fans and others in his industry. After his death, comedian Lee Mack said: "I've known this day was coming for some time, but it's no less heartbreaking. A true original both in comedy and life. I will miss him so much."

Larry King presented on US TV from the 1950s
Advertisement

Legendary US talk show host Larry King passed away earlier this year after contracting sepsis following a covid diagnosis. He had been a mainstay on US television since the 1950s, fronting a number of TV and radio shows with his name in the title. He also made cameos in films and was most famous for grilling famous faces in interviews - from Vladimir Putin to President George W. Bush.

Nikki being evicted from the Big Brother house in 2006 (Photo: Getty)

Nikki Grahame appeared on the seventh UK season of Big Brother but quickly became a national treasure. She went on to appear on editions of Big Brother all around the world and was known for her precocious energy - particularly for throwing loveable diva fits in the house. She was a warm and relatable figure, who sadly suffered from anorexia - which eventually took her life.

The Queen and Prince Philip were married for 72 years

Prince Philip, husband to the Queen, died this year aged 99 - a few months before his hundredth birthday. He had supported the Queen's role as Head of State throughout his life, appearing at public engagements with her until he was 96. However he wasn't just known for his spouse - he was also known for a series of public gaffs. Perhaps most famous is the video where the late Duke of Edinburgh publicly yells at a photographer, saying "just taking the f***ing picture."

Helen was one of the principal cast of Peaky Blinders

Helen McCrory was a legend of the stage but she was most known as Polly in Peaky Blinders. After getting cancer, she sadly passed away earlier this year. Following her death, her Peaky Blinders co-star Cillian Murphy told The Guardian he was "in awe" of his co-star. "She could do power and vulnerability, one after the other," he said. "She was just so cool and fun, and had such compassion for everyone she met."

Paul Ritter played Friday Night Dinner legend Martin, patriarch of the Goodman family who host weekly family dinners. He's perhaps most famously quoted by his character's catchphrase, "a lovely bit of squirrel" which he said throughout countless dinners. Over the years, he became a cult icon for playing the zany, eccentric father character. Earlier this year, Ritter appeared in a documentary about the series shortly before his sad death due to a brain tumour.

DMX had a long career in rap, having first been signed in 1992 (Photo: Getty)

Rapper DMX passed away aged 50 after suffering a major cardiac arrest. He had been Grammy-nominated three times and had collaborated with the likes of Jay Z and Ja Rule. He's recognised by many for his 2003 track "X Gon' Give It To Ya" which has appeared on the soundtrack of video games like Forza Horizon 3 and Def Jam Vendetta. He'd been in the industry since 1992, when he signed with Colombia Records.

Legendary Rolling Stones drummer Charlie Watts also passed away this year after battling throat cancer. He had been in the band since 1963. After his passing, Stones frontman Mick Jagger said live on stage during the St Louis date of their No Filter tour: "We all miss Charlie so much, on the stage and off the stage, and we’d love to dedicate this tour to Charlie. Here’s to you, Charlie!”

Former Girls Aloud member Sarah Harding was diagnosed with breast cancer in 2020 and sadly passed away in September. Tragically, her late diagnosis was partially due to covid, as the singer had delayed seeking help, which she wrote about in a memoir. "I was aware that I needed to get this health issue sorted, but with everything that was going on, it was tough," she wrote in the book.

Michael was a mainstay on US TV dramas

Boardwalk Empire and The Wire actor Michael K Williams sadly passed this year from an accidental drug overdose. He was an incredibly recognisable TV face away from just those two shows though. Aside from his biggest role as Omar Little in The Wire, the Emmy-nominated Williams also starred in shows like Lovecraft Country and When They See Us.

Halyna was tragically shot on a movie set in New Mexico (Photo: Getty)

Cinematographer Halyna Hutchins was tragically shot with a loaded gun on the set of western Rust by actor Alec Baldwin earlier this year. A court case is still ongoing to ascertain whose was to blame for her accidental death - while Baldwin has since asserted he didn't pull the trigger on the loaded gun.

James as the loveable Gunther on Friends (Photo: Warner Bros)

Not long after his appearance on the Friends reunion, James Michael Tyler - the actor who played coffee shop maestro Gunther - sadly passed away from prostate cancer. He was obviously most famously known as "the seventh friend" - but Tyler also had cameos in Sabrina The Teenage Witch and Scrubs. He returned for Friends ill-fated spin-off, Joey which stared Matt Le Blanc.

Read our article about why Gunther was always the seventh friend.

Sir David had worked in his constituency since xx

Sir David Amess, Conservative MP for Southend West, was tragically murdered during a local appearance in his constituency in October. Following the murder of fellow politician Jo Cox in 2016, Amess's death prompted a new policy for MPs to be protected by private security guards during constituency surgeries. Following his death, Prime Minister Boris Johnson praised Amess's “remarkable record on behalf of the vulnerable and the voiceless.”

Virgil Abloh became the first African-American to lead high-end fashion brand Louis Vuitton. He was also a prominent designer for songwriter Kanye West, working as his creative director. As well as being a pioneering Black figure responsible for updating the image of fashion, he was also a DJ and artist. He sadly died aged 41 after battling cancer.

Desmond Tutu is seen a pioneering figure in the fight for equality in South Africa (Photo: Getty)

He was one of the religious figures we all grew up with, although perhaps didn't know too much about. Desmond Tutu was a vocal outspoken critic of apartheid in his native South Africa. A pillar representing human rights and equality, he long campaigned against the oppression of Black people in his country. In 1984, he was awarded the Nobel Peace Prize for non-violent opposition to racism.