Quebec is considered the heart of French Canada and, as such, speaking French is pretty much part and parcel of living there. However, for one actual Frenchman, the language test required for immigrants was too difficult to pass. 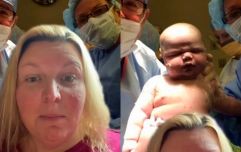 END_OF_DOCUMENT_TOKEN_TO_BE_REPLACED

In an interview with the Star Phoenix, Yohan Flaman, 39 - a truck driver from Limoges, France who came to Quebec back in 2018 - revealed that he took the test last year. Turns out he failed. An actual French person failed a French-speaking exam. Yikes.

Although it makes you think of all those stories of super difficult citizenship tests around the world, where most people reckon they would fail on reciting the national anthem or knowing their country's history, this one takes the cake - or rather, le gâteau.

Yohan said he thinks the test is "ridiculous" and believes that “If I failed it, when I’m French, I can understand how someone who is Mexican, who doesn’t speak French, could fail”. Funny as this instance may be, it makes you wonder just how hard these exams are for immigrants trying to enter the country.

The Quebec Experience Program is a fast-track scheme run by the Department of Immigration, Francization and Integration. It grants permanent residency to foreign students and workers.

However, Yohan said that while he agrees immigrants should be able to prove they can speak the language to a level, the test is clearly too hard if even a native speaker has trouble passing.

He isn't the only one either: Emilie Dubois, another French native and a PhD student also failed the exam back in 2019. Sacré bleu! Dubois wasn't deemed to have a strong enough level of French, initially, and Flaman struggled on the oral comprehension, having to analyse recorded conversations from different points of view, which included political content.

As he went only to say, “We’re all human. We have different levels of concentration [...] Anyone can make a mistake.” While the decision against Miss Dubois was ultimately overturned, our mate Yohan had to retake the test in July. Thankfully, he passed - though he is still waiting for the certificate.

Question is, as an English speaker - native or otherwise - do you reckon you'd pass your English language test if you had to take one?

popular
Man faces three years in jail in Dubai for legally smoking marijuana in his own country
Cop who pepper sprayed Black US army officer at traffic stop fired
Comedian learns Prince Philip died while mocking him onstage
A definitive ranking of every swear word from worst to best
Why John Corbett probably isn't Jo Davidson's mystery relative in Line of Duty
Prince Philip gets final wish after asking Queen to 'stick me in the back of a Land Rover'
Prince Harry issues new statement after death of Prince Philip
You may also like
Football
The teenager swapping maple syrup for football scarves from around the world
News
Canadian Rapper dies falling off the wing of a plane while filming music video stunt
News
Canada is nearly out of weed only two days after legalising cannabis
News
Canada becomes second country in the world to legalise cannabis
Life
WATCH: The world’s fastest, tallest and longest dive roller coaster looks utterly terrifying
Next Page