They are, of course, not, but then we've only experienced them with the full effect of gravity working on them, and can you really say you've given something a thorough critical analysis if you haven't tested it in zero-gravity?

Us normies don't have much access to zero-gravity, which is why we have astronauts out in space to do this kind of thing for us. They probably do a bunch of other sciencey shit too, but that's not what we're here for.

NASA astronaut Randy Bresnik, currently stationed on the International Space Station, uploaded a video of himself and other astronauts mucking about with fidget spinners in zero-gravity, and the results are actually pretty cool.

A fidget spinner in space! How long does it spin? I'm not sure, but it’s a great way to experiment with Newton’s laws of motion! pic.twitter.com/5xIJDs2544 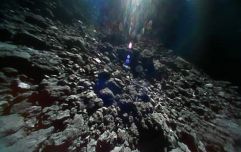 END_OF_DOCUMENT_TOKEN_TO_BE_REPLACED

"A fidget spinner in space!" Bresnik wrote. "How long does it spin? I'm not sure, but it's a great way to experiment with Newton's laws of motion!" That's just about the most adorably nerdy way of saying, "Let's dick about with a fidget spinner!"

Thanks to the lack of friction, coupled with the floating-in-mid-air thing, space has managed to pull off the impossible: it made fidget spinners cool.

You may also like
News
Possible signs of life found on Venus
Fitness & Health
This is how NASA astronauts work out while in space
News
Scientists reveal the first photo of a black hole ever taken
Life
NASA Rover shares incredible 360 degree ‘selfie’ from the surface of Mars
News
The moon will turn red on Friday, during the longest lunar eclipse this century
Next Page