Lionel Messi is the manager of Argentina

No matter what way you look at it, everyone knows this to be true. The Barcelona legend does what he wants for his country and generally gets his way regardless of the situation.

Nowhere was this more the case than during Argentina's ill-fated World Cup campaign in Russia.

Barring one exciting late win against Nigeria, Argentina were an utter shambles, and revelations after their 3-0 defeat to eventual finalists suggested that he - rather than manager Jorge Sampaoli - would be selecting the team for their final group game.

That sort of talk was only fueled further when Marcos Rojo revealed that it was Messi's words at half-time which inspired the team to victory, as well as a video footage purporting to show Sampaoli asking Messi if he should introduce Sergio Aguero to the game.

Add to that a report by Argentinian newspaper Clarin, which describes two incidents which took place within the Argentine camp this year, and it's not hard to see just how much influence Messi is exerting when on international duty.

The incidents in question took place in March - prior to Argentina's 6-1 friendly defeat to Spain - and June respectively, with the second taking place shortly after the national team had congregated in Russia.

According to the report, the first incident occurred in Manchester as Argentina prepared for a number of friendly matches.

During a training session, Messi was approached by one of Sampaoli's assistant coaches, Sebastián Beccacece, who offered him instruction. 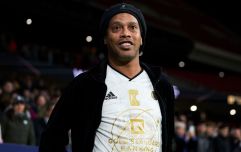 Lionel Messi sends support to Ronaldinho after his mother's death

END_OF_DOCUMENT_TOKEN_TO_BE_REPLACED

Now, while this itself may seem ill-advised, it was in fact Beccacece's temerity in touching Messi on the shoulder which angered the forward.

After the incident, an angry Messi is reported to have asked the manager that such an occurrence never happens again.

The second incident is not related to issues of personal space, and instead illustrates the level of influence Messi has on team selection.

The report claims that prior to Argentina's World Cup opener with Iceland, Messi approached Sampaoli to advise him that it would be wise to drop both Federico Fazio and Giovani Lo Celso from the first team.

Both players had enjoyed positive seasons with their respective clubs, AS Roma and Paris Saint-Germain, but Messi appears to have had his way.

In the end, Fazio played just 45 minutes at the tournament, while Lo Celso failed to enter the field once.

Clarin has hypothesised that Messi's dislike of Lo Celso is not related to football matter, and is rather rooted in the fact that the PSG man beat him easily in a game of football tennis. This far-fetched story has however already been denied by sources close to Messi.