Manuel Locatelli continued his man of the match performance off the pitch, as he joined the likes of Ronaldo and Pogba in removing sponsored drinks from the press table.

END_OF_DOCUMENT_TOKEN_TO_BE_REPLACED

Before he started his post-match interview, Locatelli followed suit and removed two bottles of Coke from the press conference table, pushing them out of frame. He forget about the Heiny but we'll let him off.

Coca-Cola really won't have been expecting to lose money during the Euros.

The 23-year-old Italian - who plays his club football at Sassuolo - isn't necessarily known as a prolific goalscorer, but he has continued his fine domestic season into this international tournament, bagging an impressive brace in what ended up being a fairly comfortable 3-0 dismantling of Switzerland.

Italy could have had more, with Chiellini's opener ruled out for handball, but the fact remains that's their 10th consecutive win without conceding a single goal. Moreover, they had never scored more than two goals in the European Championships: they have now done so twice consecutively in the space of a week.

Italy really starting to look like the team to beat pic.twitter.com/pwkIrFOGhk 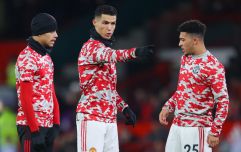 END_OF_DOCUMENT_TOKEN_TO_BE_REPLACED

But forget about how good Italy are (we're trying not to think about it for our own sake), how funny is that a third player has now decided to remove a branded drink from a press conference. I mean, we're sure it's happened on occasion before, but with big names like these doing it on such a big stage, these companies have got to be asking themselves questions.

Beyond just pretending that fizzy drinks and beer are fitting sponsors for a tournament showcasing athletes who work hard in terms of fitness and nutrition to be at the top of their game - it's just needless, capitalist opportunism - we're hoping these become watershed movements and that we start to see the end of product placement.

Idealistic as that may be, these personalities doing so in such a public manner certainly sends out a statement, whether it's a truly focused one or not.