Nice guy Norris is not messing about next season

Lando Norris has been one of the darlings of Formula 1 ever since his full debut in 2019 and after a promising season at McLaren, the young Englishman is determined to do big things in 2022.

END_OF_DOCUMENT_TOKEN_TO_BE_REPLACED

Speaking in a candid interview with BBC Sport, the 22-year-old discussed everything from leaving the country, next year's car and how his attitude has changed this season. Despite being a firm favourite in the paddock, especially among the younger drivers, Norris says he's ready for those relationships to change and put friendships aside.

"I don't think there will be as much Mr Nice Guy" 😇

Speaking on his connection with the likes of George Russell, Alex Albon and Charles Leclerc, he said there's still "a lot of compliments and we get along and we chat, but things always change when you become competitive against each other." 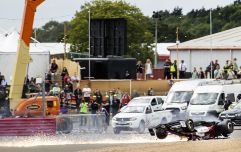 END_OF_DOCUMENT_TOKEN_TO_BE_REPLACED

"We're still in a friendly phase because we never raced each other. But if all of sudden we go into next year and in the middle of the championship it's me and Max [Verstappen] and Lewis [Hamilton], I don't think there will be as much Mr Nice Guy. That's just the way it works."

Though they currently sit fourth behind Ferrari in the Constructors table, McLaren has emerged as arguably the next team to potentially challenge the top two of Mercedes and Red Bull, with Norris himself sitting in fifth with four podiums to his name.

The Bristol-born driver nearly clinched his first-ever F1 win earlier this year when he qualified on pole for the Russian Grand Prix, holding off Hamilton for 51/53 laps before wet conditions and a gamble on tires saw slide him off the track and end up in seventh. Watch the heartbreaking moment here:

The moment a first #F1 win finally slipped away from Lando Norris#RussianGP pic.twitter.com/W3ofVyM6Fb

END_OF_DOCUMENT_TOKEN_TO_BE_REPLACED

The seven-time World Champion congratulated and comforted the young star following the race and while he admits it's "still gutting", he had no regrets, saying, "I think I'm over it."

He went on to insist that "If it didn't rain any more, I'm 99.999% sure I would've won the race. The only person who would've beaten me was Lewis if he managed to get past." Spoken like a man whose confidence is building and racking up more points than teammate Daniel Ricciardo certainly will have helped.

With just two races left in the 2021 season, Lando is already looking ahead to next year and both he and the team are looking to make significant changes in the hopes they can close the gap on the front-runners.

As well as moving to Monaco - a hub for many of the world's best racers - Norris is looking forward to a productive winter and pre-season testing period.

Say hello to my new home! The place isn't finished yet but I'll be living here in Monaco when I'm not in the factory or at the track next year.

I get the keys at the end of next month so will hopefully be moving in soon. Really excited for this next chapter! pic.twitter.com/rsYCcbXXls

He went on to add that next year "will be so different because it's going to be a very different car", as the team will once again have to meet new F1 regulations designed to make the competition tighter than ever. I think we speak for everyone when we say we can't wait.

We're sure we'll see the same big personality on and off the track next year, with a few Twitch streams still sprinkled in here and there, but we're looking forward to seeing what an unleashed Lando Norris looks like.