The Anti-Coke King is also the king of Instagram capitalism.

The Instagram rich list, which ranks how much a person can get from a single post, has revealed which celebrities earn the most for hitting the post button. Cristiano Ronaldo batters the competition, pulling in a huge amount per post. The irony of this is that early in June, Ronaldo removed bottles of Coca-Cola from the press conference table. This was due to health reasons, but he was quickly pegged as the face of anti-capitalism. 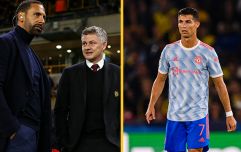 END_OF_DOCUMENT_TOKEN_TO_BE_REPLACED

The list is put together yearly by Hopper, whose software monitors Instagram analytics. They released a list of the highest-paid celebs, and most of them are not surprising. The majority of the Kardashian clan are on there, though shockingly, they are not the most paid.

Cristiano Ronaldo's 308m followers, who are predominantly made up of footie fans and thirsty mums, are part of the reason he manages to earn such a whopping $1.6m per post. The 36-year-old football star had appeared on the list before, as, in 2020, he was slated to earn $889,000 per post.

Other people on the list are obvious choices. The Kardashians are littered across the rankings, with the most notable being Kylie Jenner. Another football star, Lionel Messi, also sits at rank seven. Music artists also dominate the list, with Ariana Grande and Selena Gomez both in the top five. There are actually three musicians in the top five if you consider  The Rock's "Your welcome" a musical masterpiece- which of course, you should.

The list also ranked influencers Charlie and Dixie D'amelio, Addison Rae, and Lele Pons as the highest-earning through Instagram. The list currently ranks 368, with many of our favourite celebrities ranking somewhere on there.

popular
The JOE Friday Pub Quiz: Week 261
Grimes says baby X Æ A-XII calls her by first name as she doesn't identify with 'mum'
'Gleeking' is the 'disgusting' bodily function that most people don't know they can do
Shipwrecked mum found dead saved her children by breastfeeding them at sea
Man has hand ‘chopped off at the wrist in London after vigilantes corner him’
A definitive ranking of every swear word from worst to best
Missing Instagrammer Gabby Petito's last text suggests 'she may have been 800 miles from last sighting'
You may also like
Sport
'Riled' Ronaldo sent Rio Ferdinand Whatsapp during on-air Mbappe-Haaland debate
Sport
Jamie Carragher and Gary Lineker in Twitter spat over MNF mistake
Sport
Jamie Carragher questions whether Cristiano Ronaldo will make Man Utd a better team
Sport
Gary Neville and Jamie Carragher finally have the Ronaldo vs Messi debate
Sport
Cristiano Ronaldo only third best player on FIFA 22, new ratings reveal
Next Page