Coleen Rooney will stand by Wayne.

Not many women could say they would stand by their husbands after a scandal, but Coleen Rooney will reportedly stand by her husband after pictures surfaced of him in a hotel room with three women.

The 35-year-old was seen partying in a nightclub after his team's victory against Salford City. Images of him in the nightclub and later with at least two women in a hotel room, went viral yesterday.

The Sun reports Coleen believes that Wayne had been set up with the snaps: 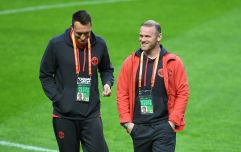 END_OF_DOCUMENT_TOKEN_TO_BE_REPLACED

“Coleen is fully behind him. She feels he’s been the victim of a stitch-up.

The Mirror reports that Rooney invited the group into his VIP booth. Wayne and two of his friends then joined the girls in their £60-a-night room at Staycity hotel.

The fan who filmed him in the street said: 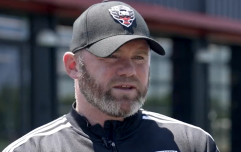 END_OF_DOCUMENT_TOKEN_TO_BE_REPLACED

“I ran over when I spotted it was him. I was so excited to see my footballing hero.

The former England player has complained to the Greater Manchester Police, though no official police statement has been made.

Not the outcome we all wanted but you have done yourselves and your country SO proud over the past weeks England. My boys have had an unbelievable experience and made great memories, thank you…… have a well earned summer 🏴󠁧󠁢󠁥󠁮󠁧󠁿 pic.twitter.com/tO5gUJxlSl

Greater Manchester Police have launched an investigation after Rooney's lawyers made a complaint to them. His legal team have not confirmed what the exact complaint was but it is understood that the ex-footballer and current Derby County manager believes he was set up.

Rooney has been with his partner Coleen for nearly two decades now. The couple started dated when they were 16 and married in 2008. They have had four sons together.

The 35-year-old is in the midst of preparations with his Derby side ahead of the new Championship season which gets underway on August 6.

popular
Multiple fatalities after planes collide mid-air over airport
UK city named the 'most dangerous' in Europe, according to study
Incredible case of the only known individual whose parents were two different species
Mum cuts off boyfriend's 'private parts' after he 'tried to rape 14-year-old daughter'
Man gets full sized Stella tattoo on his head because he loves the drink that much
Pilots fly over destination airport at 37,000 feet - because they were both sleeping
Rachel Bilson says Bill Hader's 'big d***' is the thing she misses most about him
You may also like
Life
Rebekah Vardy calls Wayne Rooney out for looking ‘like a potato’ in court sketches
Entertainment
Rebekah Vardy 'suffering from PTSD' and hospitalised twice since Wagatha Christie claims
News
Rebekah Vardy breaks down in tears in first TV interview since Wagatha Christie defeat
News
Rebekah Vardy faces up to £3m legal bill after 'Wagatha Christie' defeat to Coleen Rooney
Entertainment
Rebekah Vardy 'devastated' over Wagatha Christie verdict in favour of Coleen Rooney
Next Page