Rooney is still in hot water as video surfaces.

Wayne Rooney is the talk of the country after images surfaced from what appears to be a particularly messy night. Now, a video has surfaced from a fellow partier who is a huge fan of Rooney's football career. 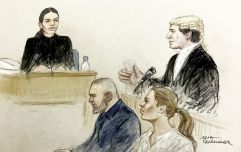 END_OF_DOCUMENT_TOKEN_TO_BE_REPLACED

“I ran over when I spotted it was him. I was so excited to see my footballing hero," said a fan who filmed Rooney in the street.

Rooney carried on walking before joining the girls in their room.

A Cheshire Police spokesperson told the Mirror this morning: "We have received a complaint of blackmail which we are reviewing."

Wayne's wife Coleen Rooney has since said she believes her husband and vows to stand by him.

“Coleen is fully behind him. She feels he’s been the victim of a stitch-up," the Sun reports. “She has spoken to him and is entirely backing his version of events. They are rock solid.”

Greater Manchester Police have launched an investigation after Rooney's lawyers made a complaint to them. His legal team has not confirmed the exact complaint, but it is understood that the ex-footballer and current Derby County manager believes he was set up.

Tayler's mother has also spoken to the Sun:

"They’re in tears. She’s a good girl and comes from a decent family. They thought they were being funny but I’ve told them it was absolutely stupid. I feel awful for them but I’m also angry because they’ve been stupid.”

A friend of Tayler's also spoke on their behalf:

“They were flattered. They had a really good night and said Wayne and his friends were lovely.The girls all love to party but I think this was probably the wildest night of their lives.

“There was no sexual contact — it was just a great night. Wayne was very complimentary of them, of how they looked, but nothing happened.”